An Adventurous Life of Service 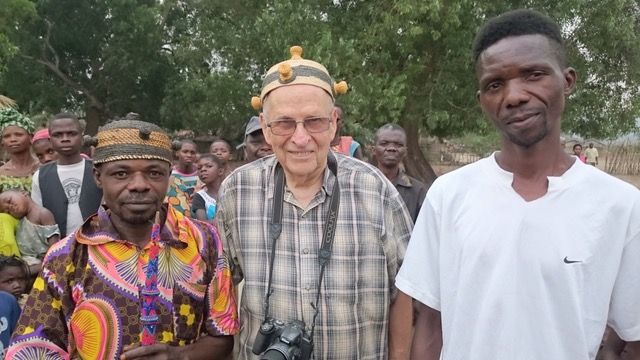 An Adventurous Life of Service

Clement “Bud” Kroeker’s adventurous missionary life is woven into the history of Africa and Europe.

Bud was born to missionaries in the Belgium Congo on December 18, 1934. He describes the first 15 years of his life as “perfect freedom”: “no electricity, no running water, no flushing toilets, no glass in windows, door closed with some string.” He spent his childhood helping parents Abe and Mary start mission stations throughout the Congo, visiting villages, learning about construction and exploring the wilds. He learned several languages, including Kikongo, French and English, and creatures like leopards and snakes were as common to him as dogs are to Americans.

“When you have an adventurous life, you don’t need movies or theme parks for amusement or thrills,” he says.

In 1944, Bud got his first taste of the United States when the family came here so his mother, who was having health struggles, could deliver her fourth child in a better hospital. The experience was like a picture book coming to life for the 10-year-old, but not one he particularly enjoyed.

“I missed the palm trees, my African friends and the open spaces. I was sent to grade school, where I didn’t understand what was going on,” he says. “Generally, [I had] the impression of being locked up in a strange place.”

Thankfully for Bud, the family returned to Congo the next year. On the way home, they witnessed ships throwing guns and ammunition overboard as World War II came to an end. Not long after their return, Bud’s parents sent him and his siblings by themselves on a four-day journey to Sakeji School, a British missionary school in modern-day Zambia. There, Bud discovered a love for printing. After starting up an electric generator, the teachers began showing films on Saturday evenings, and one film was a complete description of a printing operation from typesetting to book binding. His desire was only increased when he witnessed African men fighting over the few remaining copies of a book during a distribution.

“I determined to become a printer so Africans could get as much literature as they needed for schools and churches,” Bud says.

After completing Sakeji School at 15, Bud continued high school in America. Saying goodbye to his parents, he took a four-day airplane trip from modern-day Kinshasa to Springfield, MO, then a train to his aunt and uncle’s house in Oregon, where he spent two years at Salem Academy, a Christian high school, preparing for a writing career. One day his journalism teacher/sports coach suggested he write articles on school sports, and soon after Bud saw his name in the Capitol Journal, the newspaper of Oregon’s capitol city.

In 1952 tragedy struck when Bud’s family, visiting West Coast churches, got into an auto accident that killed Bud’s 12-year-old brother Philip. “This was a big shock for this missionary family,” Bud reflects. “My parents had spent 20 years in Africa without any doctor or hospital near us, and very limited medical supplies, and God had taken care of us. My mother, with no medical training, had treated the Africans around us, herself and our family. Now in America, in a very nice hospital, my mother was wounded and my brother dead.”

The family persevered. Bud only required two courses to finish high school, but family friend G.W. Peters, president of Pacific Bible Institute (PBI), suggested he get a semester of college credit there instead. And so, Bud enrolled in the school that would one day become Fresno Pacific University—though the campus was quite different.

“PBI was in the old YWCA building located at M and San Joaquin Streets in downtown Fresno. The girls’ dormitory was upstairs above the classrooms. There was no gym but a large swimming pool in the basement, so we had swimming once a week as sport—separated boys and girls. The boys’ dormitory was in a motel just north of town,” he says.

1952 would continue to be a pivotal year in Bud’s life when his printing career finally began in September. Hired as an apprentice at A-1 Printers in downtown Fresno, he learned to set type and operate small presses.

“I didn’t have much social life, because I worked about 20 hours a week and rode my bike all over Fresno to get type or ink and deliver publications,” he said.

After receiving his high school diploma in Spring of ’53, Bud transferred to Wheaton College in September. There, he took courses practical for mission work, helped edit the school newspaper and worked for the Glen Ellyn News, where he ran the offset press, laid out the newspaper and set type.

During that time, Bud spent his Sunday mornings helping run a Sunday school for African American children in the nearby Chicago slums. There he and Charlotte Woollett discovered they had much in common: missionary parents who they had not lived with since they were 15, familiarity with California locales such as Hume Lake and Mount Hermon, and a love for writing. After graduation they married on June 21, 1958, in Redwood City, CA.

The young couple planned to build on Abe Kroeker’s groundwork by starting a printing ministry in Africa, but had to wait due to political instability in the Belgian Congo. They arrived in Belgium by ship in February 1959 and began the Bible Literature Fellowship mission, today called Bibles and Literature in French (BLF). BLF is “dedicated to producing and distributing quality Christian literature for evangelization, church planning and Christian growth,” he says. Over the years, BLF grew from a small operation run from the Kroekers’ basement to a full Christian bookstore that ships to 26 countries. Bud and Charlotte’s six children grew up with BLF, helping with anything from binding to shipping.

“BLF is not the only publishing house in Europe, but its biggest impact has been in evangelism and reaching out to African countries and all French-speaking countries in the world,” Bud said.

While BLF prospered in Belgium during the rebellions that swept the Congo, Bud’s childhood home did not. Visiting his homeland with son-in-law Olivier Engels in 2010, the two went on a 2,000-mile trip into the interior in a rented pickup, driving mostly on a new highway but also exploring long-forgotten roads of mud and sand. On the way, Bud saw the wreckage of the houses and schools where he had grown up.

“I was very sad the day I went back to the village in Congo and walked past the few columns still standing of the place that was our home. I was even sadder to see the other buildings I had helped build all lying in ruins. A tall tree was growing in the rainwater cistern near our house,” he says.

Today, Bud and Charlotte live in retirement in Belgium. At 84 years of age it is no longer practical for them to make trips to the Congo, but they keep in touch via mail and phone as Bud helps local leaders plan out mission work. He and Charlotte intend to serve however they can as long as the Lord gives them strength.