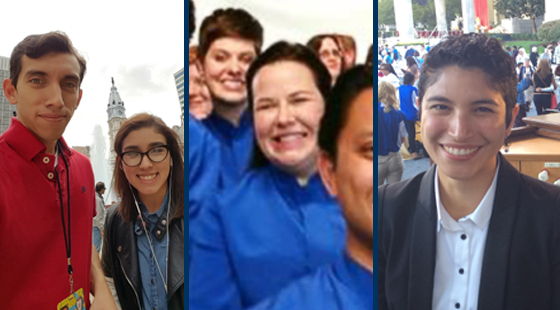 Three Fresno Pacific University alumni got to experience Pope Francis’ September 2015 visit to the U.S. up close. We asked Joy-Leilani Garbutt, Edgar Guzman and Carolyn (Damschen) Wise about their experiences and to catch us up on what’s happening in their lives.

What did you do?

Garbutt: As a part of my role in the sacred music program at Catholic University, I am the organ accompanist for the CUA Chamber Choir. The choir sang (as an independent group, and as part of a larger mass choir) for the Papal Mass, and so it was my great honor to accompany the choir. Specifically, I played the organ part for the “Dona Nobis Pacem” from Bach’s Mass in B Minor and “Ecce Quam Bonum” by Richard Proulx. Next I did a brief improvisation leading into the Introit (which had been written for the Chamber Choir for this occasion). And finally I played continuo for “Albricias Mortales,” a Renaissance-era piece by Manuel de Zumaya, during the preparation of communion.

Guzman: I covered the atmosphere of the city and locations where Francis was going to be visiting. With all the excitement and with a little over a million people in Philadelphia there was a lot of energy and stories to be covered.

Wise: I had the incredible privilege of singing soprano in the choir for the mass celebrated by Pope Francis at the Basilica of the National Shrine of the Immaculate Conception, during which Padre Junipero Serra was canonized. I have sung with the Basilica’s choir since 2010, which is comprised of 24 professional singers from the D.C. area and provides music for weekly liturgies as well as special masses on Holy Days, and is often featured on EWTN (Eternal Word Television Network). Our choir was featured during the Pope’s entrance into the church with an epic brass and organ accompaniment, singing a new arrangement of “Christus Vincit.” We were one of several ensembles that sang for the mass itself, along with the Catholic University choirs and a choir comprised of parishioners from around the Washington metro area.

What were your feelings?

Wise: It was a really thrilling experience musically and spiritually. This was actually my second time singing for this Pope: the Basilica Choir traveled to Rome in 2013 shortly after Francis’ election and performed in St. Peter’s square for a papal audience. This time was particularly meaningful since it took place at what I consider to be my home church. I converted to Catholicism shortly after that trip to Rome and after many years of prayer and study, and participating in worship with the successor of St. Peter here, where I live and work, was a humbling experience. It was also physically demanding since I was eight months pregnant with our little girl (she was born the week after), and required many hours of standing and singing during the several days leading up to the mass.

Garbutt: I was very excited! And also very humbled to have been asked. I know there were so many people who wanted to attend the mass and couldn’t be there, so it was extra special to not only get to be present, but to have an active role.

Guzman: I went in with no major expectations, I wasn’t exactly meeting the pope. I had a job to do and focused on the events as a journalist, as a storyteller. There was definitely excitement and a rush of energy when he passed by in his motorcade. Whether you were Christian or not you felt it and got a sense of his love for God. You could see him just joyfully going among the crowds waving, smiling and kissing babies. You could see his love was full of Christian love. It was contagious.

What are you doing now?

Guzman: Since I’ve returned I have met up with others from the Valley who attended these events and we’ve shared our stories. I have been invited share my experience with groups at the Newman Center. I continue to work with KNXT in programs, especially those for young adults. Francis’ trip to the U.S. has left giant windows of opportunities for Christians, not just Catholics, to step up and represent our faith. I’ve taken it upon myself to step up and reach beyond the pews, or seats.

Wise: For now I’m taking some time off to enjoy being a mom for the first time to our baby girl, but I’ll soon be resuming my dual-career schedule of singing and selling real estate. In the next year or two I hope to go back to school to pursue a master’s degree in voice and early music.

Garbutt: My Ph.D. studies at Catholic keep me pretty busy, but I am also doing as much playing as I can. I had my first performance with the Washington Bach Consort, playing the opening organ piece for one of their Cantata Concerts. Next semester I’ll be giving my degree recital featuring organ music composed by women in early 20th-Century Paris. So I’m also doing a lot of research and score gathering for that.