A Journey of Faith and Life 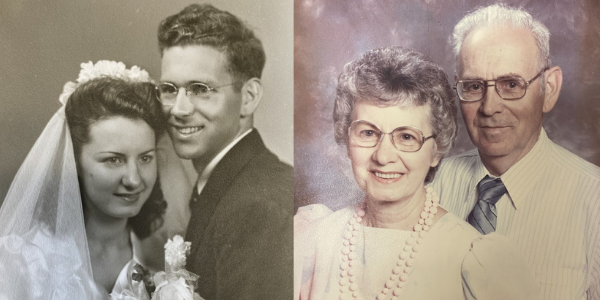 A Journey of Faith and Life

In 1944, 28 young people took a leap of faith as the first class at Pacific Bible Institute–a leap that led to a life of service. This alumni story features two of those PBI alumni.

As a young man in the 1940s, Bernard Wall built a sturdy walnut dining table that endures to this day. His children recently gathered around that table to recall something else that’s lasting: the legacy built by their father and their mother, Margaret.

The children—now in their 60s and 70s—shared memories of their parents filled with faith, hope and love. “They were simply great people to know,” says Ruth Wiens, the Walls’ oldest daughter.

Bernard and Margaret attended Madera Avenue Bible Church (originally Madera Mennonite Brethren Church), the same congregation where Bernard grew up and where he eventually served as pastor. “Dad and Mom were satisfied because they knew Madera was their place,” Sam Wall, their older son, says.

Bernard, who passed away in 1990, received Fresno Pacific University’s first Distinguished Alumni Award in 1982. The award honors graduates whose lives have reflected the university’s emphasis on service and excellence. The distinguished alumnus is described as one who “diligently labors among us,” a reference to 1 Thessalonians 5:12.

Margaret, who passed away in 2021, did no less. She was a pastor’s wife: teaching Sunday school, caring for people in the church with meals and visits, and maintaining a home with a busy husband and five children. Sometimes she even did the work of a plumber at the Walls’ house.

Bernard and Margaret met in 1945 at the Pacific Bible Institute, the forerunner of FPU. Margaret came from Corn, Oklahoma, to study at the new Bible school, and she later described the experience of leaving home as a “grand adventure,” says Chris Wall, Sam’s wife. Bernard had a shorter distance to travel. He transferred to PBI from Fresno State because he wanted to attend a Christian school.

Margaret’s roommate at PBI was Bernard’s sister, Clara. When Clara invited Margaret home to Madera, it didn’t take long for Margaret to take serious notice of curly-haired Bernard. The couple married in 1946, the same year Bernard became one of the first graduates of PBI. The young couple settled in Madera, and Bernard—like his father—went to work for the U.S. Postal Service, a job he held for nearly 30 years.

But that was not his only work. From the mid-1950s until 1969, Bernard led the Madera church as pastor, making him the preacher, Bible teacher, administrator and janitor. His greatest gift was teaching, his children say. He loved the Old Testament, and after dinner he often studied the Bible in his recliner, sometimes falling asleep as he read. The study paid off. “Dad could take the Scriptures and make them alive,” says son-in-law Gary Wiens. He remembers one service where Bernard used a glass of water, salt and a light bulb to illustrate Jesus telling his followers to be salt and light in the world.

In ways often unheralded, Bernard himself followed that command. He took a homeless man to a hotel in Madera and paid for his room. He built fine cabinets for a poor church family who lived in a rundown house. He turned some Sunday evening services into “Ask the Pastor” sessions, where folks could bring their questions about the Bible.

While serving as pastor, Bernard was diagnosed with a serious heart problem which led to his first open-heart surgery in 1964. He was barely in his 40s. Four more heart surgeries would follow over the next 26 years, and through it all, the couple’s faith in God’s grace and care remained strong. “They had a deep-seated belief that God is in control,” Ruth says.

Then in 1990, when he was 67, Bernard died during his fifth open-heart surgery. Sons Sam and Jim, along with son-in-law Gary, built a coffin—a fitting way to honor a man who had loved woodworking his whole life. He had dreamed of building a boat and an airplane from wood but never did.

Meanwhile, Margaret faced the future with clear-eyed determination. She continued a life of service—reaching out to shut-ins and helping with church activities. But, Jim says, “She also started a whole new life.” She traveled with her children—even snorkeling in Hawaii at 82. She used Facebook and Instagram to stay in touch with her grandchildren and great-grandchildren, and she made family history albums. “She wanted the next generation to know who they are,” says son-in-law Greg Camp, married to daughter Esther. (Greg is associate dean in FPU’s School of Humanities, Religion and Social Sciences.)

Margaret lived nearly 31 years as a widow; the last 15 in the home of Sam and Chris. She died there as her children and other family members kept watch. “There were times we were sure she was seeing angels coming to get her,” Ruth says. When family members told her it was all right to go if it was time, 96-year-old Margaret quietly replied: “In God’s time.”

When Margaret passed, her sons took pulpits that Bernard had built and preached from, and they constructed another coffin. Margaret was laid to rest in the same burial plot as Bernard, their journey together in this life complete.

(Another daughter, Mary LeMaster, and her husband, Rick, live in Fruitland, ID.)

The new Leap of Faith…Life of Service Endowed Scholarship was recently set up by anonymous donors to help future generations take the same leap of faith as did the first class of Pacific Bible Institute and enter a life of leadership and service. To contribute to this scholarship, please contact Katherine Herms at katherine.herms@fresno.edu or 559-453-3678.