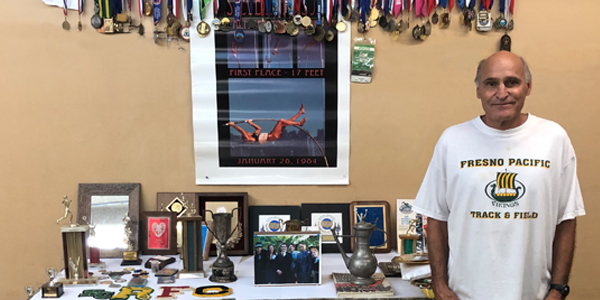 Steve Hardison’s passion for pole vaulting gave him a record-setting career that opened the door for international ministry. But the hardships he overcame led Steve to his savior.

A passionate pole vaulter and 400-meter runner for most of his life, Steve won three national titles at FPU (holding the school pole-vaulting record for over 40 years), set the South African national pole vault record in 1980 and the U.S. national record in his age bracket in 1990, got the best time in his age bracket for the master’s track in 2000 and even competed in the Olympic trials in 1976.

He continues vaulting and running today at age 71. “Having goals to train for…has been life-giving. It’s the relationships that matter. It’s the friends I train with and being part of a culture of track and field,” Steve said.

Steve’s interest in pole vaulting began in fifth grade, when an Easterby Elementary teacher set up a vaulting facility at recess (with sawdust for a landing pit). Falling in love instantly, Steve set up his own facility in his backyard, using a metal conduit pipe as a pole and digging up dirt for a softer landing. He also tried to vault his neighbor’s picket fence at the time and can still show you the scar.

A few years later Steve arrived at Roosevelt High School at the same time as coach Bill Allen, and his hobby grew into a promising career. “[Bill] was a pole vaulter from Fresno State who had the most clear, up-to-date thinking, and I arrived when he arrived, and that was what made me a good athlete—giving me a good foundation for good technique,” Steve said.

With Coach Allen’s help, Steve earned the title of Valley Champion by his senior year and set the Roosevelt record in 1968 (14’11”)—a record still unbroken 53 years later. Catching university recruiters’ attention, he set Fresno City College’s record in 1969 and won State Champion. UCLA invited him to join their program.

Despite a successful first year at UCLA, Steve’s time there wouldn’t last. In his second year his statistics’ grade fell below university standards, and he became ineligible to compete. Since pole vaulting was his main motivation to attend, he left mid-semester in 1972.

“I was devastated, because [pole vaulting] was my identity, even. And I left UCLA and went back and lived in my parents’ garage, and went through a time of real depression,” he said.

Bad fortune changed to good when Steve joined a Christian athletes team with a former UCLA roommate. They competed with national teams in eight African countries and Israel in summer of ‘72.

“God helped me raise the money to go, and it was a life-changing thing because of what I was going through and my failure as a pole vaulter. My whole spiritual direction was changing,” he said.

Competing overseas was exciting, but really just a path to the team’s true purpose: mission work. Steve explored his faith more deeply after he found himself in a position to teach the Bible.

“I was a Christian, but I didn’t know how to help them,” he said. This helped Steve grow in his faith, and from then on, his faith and athletic career were intertwined.

Before Steve left for Africa, Coach Huhn at Pacific College (now FPU) convinced him to apply, and Steve became a Fresno Pacific Viking in 1973. The Christian influence was a large part of the appeal for him.

“I was one that was like, ‘Oh, goody, chapel!’ because I was ready for that. I enjoyed the atmosphere here of the Godness and having a coach that would pray for you is really special,” Steve said. As a student with a full beard, he looked similar to images of Jesus. “During a meet we won, a man jumped up and yelled, ‘That’s not fair, you have Jesus anchoring your team!’ That was funny, but I really did want to represent our Lord,” Steve said.

Track and Faith Together

After graduating from Pacific College, Steve joined Athletes in Action as part of Campus Crusade for Christ, a ministry which shared Christ through track, in 1975. He and several other men led clinics all over the state for 5 years. “We were coaching, and then sharing wisdom about track but also our testimony, and giving them a chance to respond to that,” he said.

During this period, Steve would make some of his highest achievements. In 1976, he met the Olympic standard and competed in the Olympic trials. He would also vault his person record of 17’6”.

Years later, a South African pole vaulter learned Steve was leaving Athletes in Action and tried to convince him to do similar work in South Africa. Steve agreed, and this ended up being “a grand finale” for his general mission and goals when he broke their national pole vault record.

Steve got to go on a paid coaching tour around the country and was ultimately asked to give a speech at a large meeting, where he shared his testimony in front of hundreds and invited them to accept Christ. “I’ve had all these talks in my head from Athletes in Action, so I get up there and I tell them how much I love the country, but what really gives my life purpose is my relationship with Christ,” Steve said.

Afterward a local Christian coach told him that if he’d tried that, he’d have been thrown out, but Steve got away with it because he was American. Steve decided to take advantage of that, continuing to share his testimony at all the clinics he led. “I’m in the desert driving in the Karoo, and I’m yelling out to God, ‘You did this, this is incredible! God, this had nothing to do with me, you planned this one,’” he said.

Becoming a Legend in Masters

Steve was committed for life. Despite what he’d call “the juggling act” of balancing track with his business and family life, Steve would spend whatever time he could training. He didn’t have time to drive to an actual track, so he’d run the canal banks near his home, using a graffitied tree and a canal pipe as distance markers.

At age 42, after an intense year of training, Steve got to race the world record holder, James King (whose picture was in Steve’s room as motivation). Steve ran his personal best that race and lost by 0.49 seconds. His 50.05 time was only 1.61 seconds shy of the world record. He was “hooked as a 400m runner.”

At 45, Steve snapped his ACL in practice, but this did not stop him. It took surgery and 3 years to regain his sprinting ability, but Steve was gifted. At age 50, he went to the Masters Nationals at Eugene, OR. In his age group, he ran the world’s fastest time for that year (53.2). Then, in the pole vault 30 minutes later and with a borrowed pole, he broke the world record.

Since then, he’s continued to train and compete, achieving medals and records: “My track story is long. Let’s just say, I’ve been blessed to compete with the best in the world and have done that in over 15 countries.”

Despite his successes, Steve has faced hardship. His father was always distant, and his lack of approval has affected Steve throughout his life. “God has shown me that I have a foundational idol of sin, which is approval,” he said. “It shows up in pride, self-centeredness, anger, defensiveness, and controlling.”

Recognizing this, Steve made a conscious effort to always show approval and love to his children, but his idol still got in the way of his marriage to wife Kelly. He often prioritized athletics, a major source of approval, ahead of his wife. “I got big approval in the track world and made bad choices to compete when it would have been right to miss,” he said.

Things only got more difficult when Steve and Kelly lost one of their children to suicide in 2015, and they have been separated for the past few years. However, they have sought reconciliation and healing through re:generation (or ReGen) at The Well Church. The 12-step program includes small-group discussions and Bible reading and helps people through any struggles they’re facing. Steve recently finished his second run through the program and has seen improvement.

“I really didn’t think of my idol of approval as sin. The Lord is helping me change my sin patterns, and I am catching myself in what I think and do,” he said.

Today Steve’s relationship with Kelly is mending. They are dating again and have gone through additional counseling beyond ReGen. “Where we’re at I don’t know, but we’re way better than we were,” he said.

Steve’s life has been one of both victory and hardship, but it is the hardships that have led him to his savior. He continues to seek God and is learning to find approval in Him instead of the world, and he hopes his testimony will be an inspiration to others.