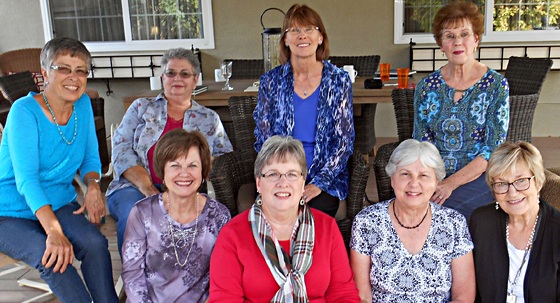 Who would have thought that young ladies beginning their freshman year in September 1964 would reunite in October 2016 to celebrate 50 years of staying in touch?

That is exactly what eight of us did. For the last 50 years we have stayed in touch via what we call a Round-Robin letter. As the Robin arrives, we each add a new letter and pictures after eagerly reading the letters from the other seven, then sending it along to the next person. Joys, sorrows and notes of encouragement have been shared through the seasons of life: weddings, child-rearing, the teenage years and that first child learning to drive, sending children to college, marriages of those children and then (Yippee!) grandchildren.

The Robin has had quite a flight path, at one point flying from California to Hawaii to Newfoundland to Detroit to Vancouver B.C. Amazingly, the Robin has never been lost. Recently, we voted to continue the tradition of using snail-mail rather than switching to email.

Seven of us have returned to our California roots, with one currently living in Iowa. We all have been, and still are, involved in some form of Christian ministry. This is the year we turn 70, and most have begun celebrating 50 years of marriage. None of us has divorced; we have lost one child and recently lost two husbands.

We are thankful for the godly foundation received during our years at Fresno Pacific. We roomed and studied together, goofed-off together, prayed together and, more than we realized back then, made lifelong friends.