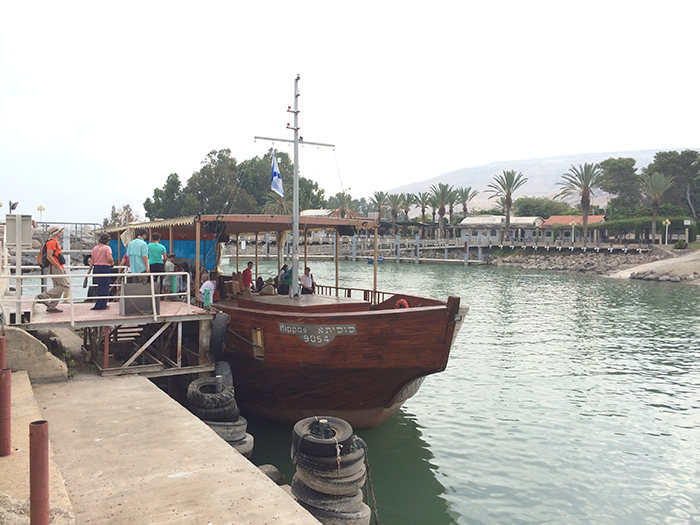 Shalom from Israel! Today is my last Wednesday in Israel and I can’t believe this journey is almost over. I am so thankful for everything that God has taught me while on this trip. The same passages in the bible that I’ve read over and over for years finally make sense now that I have the visual images and better understanding of the culture to support and illustrate them. I have seen God’s hand moving in my life as well as those around me these past three weeks. I can’t begin to explain the peace and fullness of God that I feel in this beautiful country. My heart is full, and I’m excited to share what God has been doing in my life with loved ones at home.

As I mentioned earlier, today was Jesus day, so naturally we started the day out with a boat ride on the Sea of Galilee. We’ve been staying at a resort on the shore for the past few nights swimming in the water every chance we got, but it was a totally different experience riding on a boat. We got quite a laugh when our captain started playing the Star Spangled Banner, and raising the American flag for us. He then put on some awesome 90’s christian music that we got to sing along to. As we were getting off the boat, When the Saints Go Marching In came on, so we were all laughing and singing as we got off the boat. It was not the Galilee boating experience I had imagined, there was a lot more giggling and singing, but it was still an awesome experience.

Matthew 4: 18-23 While walking by the Sea of Galilee, he saw two brothers, Simon (who is called Peter) and Andrew his brother, casting a net into the sea, for they were fishermen. And he said to them, ‘Follow me, and I will make you fishers of men.’ Immegiately they left their nets and followed him. And going on from there, he saw two other brothers, James the son of Zebedee and John his brother, in the boat with Zebedee their father, mending their nets, and he called them. Immediately they left the boat and their father and followed him. And he went throughout all of Galilee, teaching in their synagogues and proclaiming the gospel of the kingdom and healing every disease and every affliction among the people.

Next we went to the Church of the Beatitudes. On the way here, we learned that an Arab boy had been kidnapped and killed by Jewish radicals, responding to the three murdered Jewish boys. At the church of the Beatitudes, we offered up prayers for peace and God’s presence. We had time to respond in the church, and it was an emotional and reflective time for me. Reflecting on the pain and tragedy the country of Israel is experiencing, and reflecting on the beatitudes was not what was expected, but a meaningful time for me. I had this song stuck in my head as I was praying:

Holy Spirit, you are welcome here, Come flood this place and fill the atmosphere

I could feel God’s presence, and knew that he was in control,  everything happens for a reason and is part of God’s plan. Later tonight as I was going through my notes to type up this response, I was skimming through my bible looking for passages with Galilee and found some old notes I don’t remember writing, but totally applied to what has been going on in this country. It was an incredible reminder that God is completely in control of our lives.

After the Church of the Beatitudes, we went to Tabgha, where we saw the church commemorating Jesus multiplying the fish and loaves and feeding five thousand. We saw another church there that commemorated the commission of Peter (John 21).

We also got to go to Capernaum, which was beautiful. We got to see Peter’s house, which had an octagonal synagogue built on top. The site was beautiful, right on the edge of Galilee with a light breeze blowing, birds chirping, and the feeling of peace.