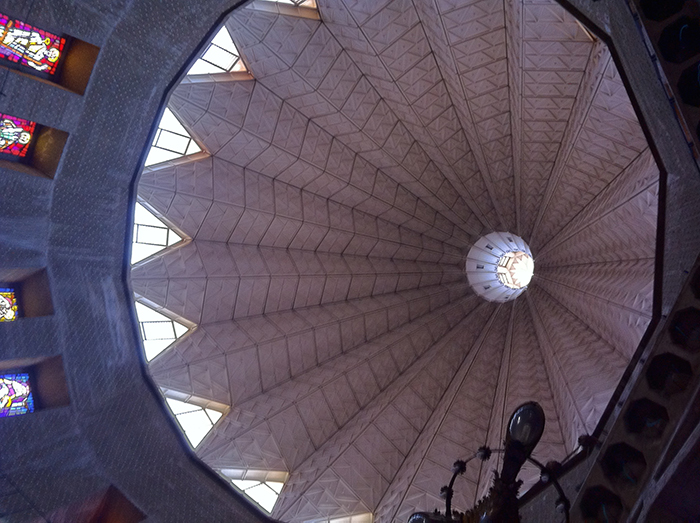 The Sea of Galilee has been absolutely amazing! Our first stop this morning was Mt. Arbel. A great way to start the day, getting our blood and adrenaline going as we hike up and around the side of a cliff. This was amazing, but I got WAY too sweaty! This site was significant, in that Herod the Great sent soldiers in to the mountain range to eliminate the robbers who were active in the area.

Our next stop was the Church of the Annunciation in Nazareth. This church was beautiful. There were mosaics all around the church from around the world, commissioned to represent the Annunciation of Jesus to Mary. Inside the church was a grotto which commemorated Mary’s house and beautiful domed ceiling. The design on the inside of the dome was beautiful and evoked the imagery of angel feathers, as can be seen in the following picture.

The most interesting part to me was the discussion on Joseph being a righteous man. The term “righteous man” in this period could be synonymous with a man educated in the Law (Torah). The context in which this was used implies that Joseph may have been an educated man and potentially a rabbi, since some rabbinical literature has shown us that carpentry (or the occupation which we have translated as carpentry in English) was a preferred occupation of rabbis.

Our next site was Tel Jezreel where we had lunch. As a dessert we enjoyed an Arabic dish called knafee (sp?). I think this was a cheese pastry with some kind of syrup on it. Whatever it was, it was delicious! While here we also pointed out and discussed various sites and stories from the Bible. This has been the coolest part of every field study we’ve done. The Bible is just coming to life more and more as we continue to study in this beautiful land.

Our final stop was Bet She’an. The site was a huge ruin of a city. It was amazing to walk around and see how a major city would have looked in ancient times. It was absolutely amazing! We were even able to see what latrines from this area looked like: