We have just finished the fall 2017 MBA course in Business Ethics, “Law, Ethics and Values in a Global Environment.” It is a challenge to complete the course in 8 weeks with depth of consideration of some large topics which require intensive discussion, but we get it done. We focus in three areas: ethical theories and tools (or their application in the business environment), personal reflection on ethical experience, and case studies. It is this last area of focus that I want to discuss.

Each week each student in the course writes and posts a brief outline and analysis of a current ethical case study that is or has been in the news for the previous few weeks or months—they are very current. In groups students research and write a case study, analyzing a specific business, diagnosing the ethical implications and reasons for the businesses problems, and then offering a series of remedies based on an ethical model used in the class. By the time we are done each student has written on eight cases, and commented on at least sixteen. It can be intensive, but it needs to be to gain the full impact of the study. Students more than rise to the occasion.

This semester we have had no end of intriguing cases to discuss: the ongoing revelations of unethical practices at the formerly trusted Wells Fargo, the turmoil, ousting and selection of a CEO at Uber, the failure to notify and remedy the data breeches at Equifax, and the sadly comical legal woes of Martin Shkreli, among others.

The first three mentioned all arose from failures of leadership, failures of a specific kind. Students picked this out, noticing the particular failing that appeared in all three organizations. In each the top leadership (including, but not just the CEO) valued pursuing aggressive growth and profit goals over treating customers and employees fairly and honestly, having the integrity to protect customer identity, treating competitors and communities with respect, and even following basic laws.

In each an examination of the organization’s core values, even if they mentioned the values of, for example, honesty, basic fairness, respect, or service to customers, subordinated these basic values to growth, profit, aggressiveness, and expansion. These latter goals were promoted the highest or core values of the organization. I have not witnessed the convergence of major scandals like this around such basic issues in the fifteen years I have been teaching business ethics. It was instructive for me, as well as the class.

We expect businesses to pursue goals, expand when they can, make a profit, and reward investors. But we also expect that they represent honestly what they offer customers or potential customers, that they charge them fairly and transparently for services that customers agree they want, that they treat the data customers supply or that they company gathers with care and appropriate security, and that they follow the laws and very basic moral agreements of our society. Modern business grew up and operates in a society, our society, with basic moral or ethical expectations. Adam Smith, the definer of early capitalism and author or The Wealth of Nations (1776), discussed this basic moral sensibility operating in his and our commercial society in his earlier The Theory of Moral Sentiments (1759).

The desire for profit, and the reward of employees (CEOs and topic executives in these instances) and investors does not override these basic moral and ethical standards and concerns. Doing business with someone or an organization requires trust, and that trust was violated in dramatic ways in the cases students presented.

In 2010, the President and CEO of Toyota, Akio Toyoda, testified before Congress about the accidents and deaths that had resulted from problems with Toyota engineering. He gave what I think is an accurate diagnosis of the root of Toyota’s missteps:

Toyota’s priority has traditionally been the following: First; Safety, Second; Quality, and Third; Volume. These priorities became confused, and we were not able to stop, think, and make improvements as much as we were able to before, and our basic stance to listen to customers’ voices to make better products has weakened somewhat. We pursued growth over the speed at which we were able to develop our people and our organization, and we should sincerely be mindful of that. I regret that this has resulted in the safety issues described in the recalls we face today, and I am deeply sorry for any accidents that Toyota drivers have experienced.

To date none of the companies we studied this semester have come close to recognizing the root causes of their ongoing problems. Toyota is still rebuilding.

Earlier this fall, I attended an event at the new Levi’s Stadium in Santa Clara. As we walked to the entrance, we saw Toyota advertising hung in two large banners above the gates. One said, “Faithful Then” the other, “Faithful Now.” Akio Toyoda described to Congress what happened in between the then and the now. Toyota seems to be aware of the ethical integrity they must have to keep the trust of the customers they serve. 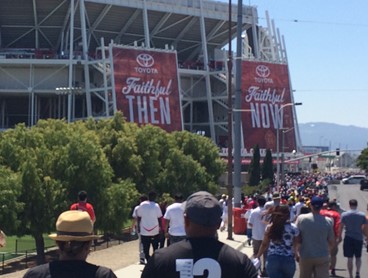 Of course, we want and do get to deeper themes, those imbedded in the nobler work that businesses and organizations do in providing goods and services, promoting the public good, and to those that are part of our faith commitments and calling to serve in business in our communities. This semester we were struck by some of the most basic values necessary for our work, and what happens when we neglect them.