“How then shall I live?” 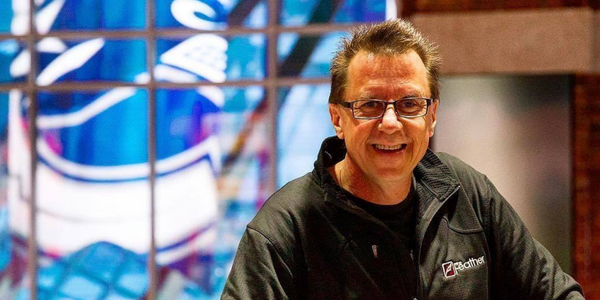 “How then shall I live?”

Cheers and hollers echoed in the Student Ministries Center at Fresno Christian High School, as colleagues, family and students clapped in standing ovation for their dearly loved mentor, educator and friend.

Earlier this year, alumnus Greg Stobbe was honored with the Columbia Scholastic Press Association’s Charles R. O’Malley Award for excellence in teaching, a prestigious merit-based award presented at a surprise party attended by former students, family, colleagues and friends at Fresno Christian Schools, where Stobbe advises student journalists. While Columbia has honored many teachers over the years, the board of directors alone identifies and presents the O’Malley Award based on an educator’s impact on national education. This year, a board member suggested Greg’s name, and the vote was unanimous.

After finding out about the award nomination, Greg’s co-adviser Kori James (TC ’00, BA ’00) got to work planning a celebration not just of his award, but of his lifetime of accomplishment.

Current and former students gathered on the high school campus in Fresno, many after traveling across the country, to surprise their teacher and celebrate his accomplished career advising The Feather, the student-run newspaper he began leading in 1996 that went online in 2001. James, herself a former student, joined him in 2013, and together grew the paper into a leader in the United States and abroad.

“In journalism, my media career was inspired by my then-superintendent Tim Wilkins. He encouraged me to take what I was doing for the print newspaper into the digital world by using an online template. Once I figured that out, my students and I began to create our own,” Stobbe said. “My classroom was not only a place to turn in articles and take vocab tests, but a space that fostered an environment of introspection and critical thinking for me and my students. My course theme for nearly 30 years remained constant: How Then Shall I Live? In the journalism lab, students worked on interviews with the presidents of Australia and Mexico, astronauts returning from space, basketball star Kareem Abdul Jabbar, and travel guru Rick Steves. We attended almost every Fresno Town Hall event, spoke with every mayor yearly from Jim Patterson to current mayor Jerry Dyer, and so many more amazing stories. I was motivated, however, by people like my own role models and inspirational stories like the holocaust survivors I read in school,” Greg says. “I knew that however great my students were doing, their storytelling process needed to change them as people and challenge their world. If their work was just for a class project, it would be a lost opportunity, a lost application of knowledge.”

Kori said she wanted Greg to understand the scope of his impact on his community, students and world by bringing together voices from his 30-year teaching career to share stories, thanks and messages. For those who could not attend, she compiled several hours of videos sent in from journalism colleagues, Columbia University and former students.

“I became a teacher because my sweet and wonderful late-wife, Geena, once told me, ‘You love telling people what to do. Wouldn’t it be great if you got paid to talk?’ She saw in me the application, or avenue, for me to channel my love of teenagers, patience in guidance, and ability to connect with and see the best in people. High school is where I could let my hair be wild, inhibitions freed, and potential unlocked. My crazy drew the kids in, but my passion kept them there. I didn’t know it at the time, but my Geena did,” Greg says.

The event attendants wanted to celebrate and acknowledge all of Greg’s time, effort and investments he made to impact generations of students. They gathered to show their love and support for their former teacher as he has gone through some very difficult years.

On September 15, 2020, Greg lost his wife of 34 years, Geena, to the neurological disease Progressive Supranuclear Palsy (PSP). One year later, he was diagnosed with optical melanoma in his only eye, and underwent treatment. Due to an accident when he was 2 years old, his sight was already limited to one eye. Exactly a year after losing his wife, he lost most of his sight in his remaining eye.

“I’m challenged with this as well: because of my work, because of my success and my knowledge, how then will I live moving forward?” he says. “I choose to look for wisdom and peace by developing habits in my spiritual life, as I do with my physical fitness… My healthy habits sustain my purpose and direction, and begin to answer the question, “How then shall I live?”

Greg and Geena met at Fresno Pacific College in 1980. Born and raised in Abbotsford, British Columbia, Greg’s reputation on campus was one he laughs about. He and friends Dave Kleschold (MA ’03, BA ’82) and David Janzen (BA ’84), they made it their quest to get into as many yearbook photos as possible. Although not actually in the clubs, they showed up for pictures day hockey sticks in tow, and still get calls from current students fundraising by soliciting former alumni club members. He did actually form a floor hockey club with Kleschold, and sang for two years in Concert Choir led by Roy Klassen. Greg was also on Student Council, performed in school plays all four years and played guitar and sang in a campus worship band called Witness. The band also played throughout the Central Valley and at the MB Youth Conference in Estes Park, CO.

Although Greg and his friends spent time on campus throwing water balloons in restricted areas and various other campus pranks, his time at FPU impacted the rest of his career, keeping him in California for over 40 years.

“At 28, I started my teaching credential program at Fresno Pacific University, and my sweetheart supported me, even while working as a nurse and taking care of our two little daughters. During my schooling, my professor Wilfred Martins inspired me deeply and set me up for a career rooted in seeking truth and knowledge, not only teaching principles and rules. He, and another Fresno Pacific professor, Dalton Reimer, challenged my worldview and expectations,” Greg says. “They had me read stories from Holocaust survivors like Elie Wiesel and Vikor Frankl. Those stories continue to haunt, inspire and push me. I’ve used them every year when teaching my students, and the inspiration I received from those people via my teacher flowed into my own students, who wrote a letter to Elie Wiesel. They even received a hand-written story in return.”

After his wife died and his battle with cancer began, Greg began writing, not only instructing his students. He and youngest daughter Brooke are working on a manuscript to tell his story and share with others the hope he received through their faith in God.

“Through processing insurmountable grief, I believe my story, and my Geena’s joy, has the power to inspire and provide hope and strength to others. My Geena said, ‘My disease doesn’t matter.’ I’ve grown to better understand that God cares far more about my attitude and pursuit of relationship with The Father than with my ability to see or be independent,” Greg says. “In the book we are writing, we offer insight and practical help for those going through grief, and wrestle with the questions, ‘Where is the church?’ and ‘What am I doing here?’ and most importantly, ‘Where is God?’”

In addition to the book, which Greg and Brooke hope will have a completed first draft this fall, he is continuing to build relationships with leaders of this community he met through advising The Feather Online. He also is spending more time in the kitchen, cooking and posting on his Instagram account, @TalesoftheCork. He originally started the page with Geena to share the stories of winemakers in the Western U.S., France and Italy.

“It became a space for Geena and me to create together, and we found so much joy in cooking, hosting and meeting people with similar hobbies and interests. @TalesoftheCork on Instagram became a landing page for food and wine pairing and daily dinner tutorials. Of course, as my Geena deteriorated, so did our content. Through working with the Valley Center for the Blind, I’m gaining confidence in my kitchen and beginning to have fun posting again,” he says.

Greg began taking some basic courses at the Valley Center for the Blind to learn independence and life skills as a newly disabled adult. Despite his losses, Greg’s faith in God continues to guide him forward to redefine his future, bolstered by his community, students, friends and family.

“Despite my current disadvantages, I have a unique advantage to rebuild my foundation and set my feet upon The Rock. I’m like David in the desert, or the Jewish people exiled in Babylon: I’m in a waiting period in the wilderness that is essential to my own strengthening and growth for my future. I’m learning about God and shedding the useless clutter in my mind which doesn’t serve me. God is refining me in the fire, so I can become the man He needs me to be for the rest of my life,” Greg says.

In continuation of his recognition on the California State level, on August 19, Greg received the California Legislature Assembly resolution honor from Jim Patterson, former Fresno Mayor and current 23rd Assembly District assemblyman. Although dated April 29th, the date of Columbia Scholastic Press Association’s award, Patterson presented the Resolution on Friday, Aug 19th in his Fresno office. It also recognizes and honors his work as a teacher, specifically for The Feather Online, and mentions the Charles R. O’Malley Excellence in Teaching as well.

You can learn more about Greg, the award, the impact he has had on his student and the event on ABC30 and in The Fresno Bee. Greg can be reached at talesofthecork@gmail.com

Greg D. Stobbe, born in Abbotsford, British Columbia, has been teaching media, journalism and English at Fresno Christian High School since 1992. He met his wife Geena (Bruno) at Fresno Pacific where he graduated in 1984 with a major in English and minors in communication and drama and earned his teaching credential in 1994. Geena graduated from Fresno State with her Bachelor of Science in Nursing, and they wed at Butler Church (near FPU) in 1986.

He and Geena have three daughters. His oldest daughter, Brianna Phillips (MA ’20, TC ’14, BA ’10) is married to Stan Phillips, Jr., and they have two children Autumn (7) and Branson (3). She is a fourth-grade teacher at Quail Lake Charter School. Greg’s second daughter, Brittany, graduated from Fresno State and is a registered dietitian at St. Agnes Hospital in Fresno. His youngest daughter, Brooke, graduated with her Bachelor of Arts in Journalism and Master of Arts in Mass Communication from the Walter Cronkite School of Journalism at Arizona State University. She now works in university recruiting at Microsoft. Every year around Geena’s memorial day, they plan to raise money to help CurePSP, the only organization searching for cures and treatments for PSP. The fund can be found at psp.org/stobbe