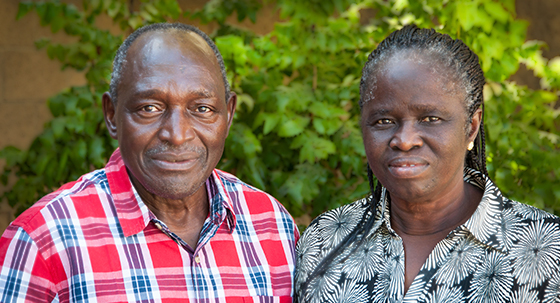 Growing up in a Nigerian village in an area with few schools, Obadiah was fortunate to attend a small school run by the Sudan United Missions. Education was already a family tradition when Obadiah went to school. “My parents sent us to school because my uncle was a missionary. He was influential in bringing the missionaries to our town,” he says. “Our teachers were not foreign, they were Nigerians. They were evangelists.”

In December 1968 Obadiah married Nanwol, his friend since childhood. That same year he went to a teacher training college in the community of Gindiri. Here he met recent Fresno Pacific College (FPC) grad, Phil Hofer (BA ’67), who taught English, while Obadiah taught mathematics and biblical studies. “We had fun, and we played a lot of lawn tennis and became friends,” Phil says.

Phil returned to the United States in 1970 while Obadiah taught in Gindiri. After he got a position teaching at FPC, Phil encouraged his friend to apply for a scholarship and come as a student. Obadiah came alone to the U.S. in 1972. His wife, Nanwol stayed in Nigeria and joined the Nigerian National Youth Service Corps. While at FPC, Obadiah worked as a college janitor to help pay expenses. Two years later he graduated with a Bachelor of Arts in Mathematics and Biblical Studies.

Obadiah returned to his home country after graduation and was a teacher and leader in church and public schools for more than 30 years. Looking back, Obadiah says Fresno Pacific made him grow. “They taught me diligence and hard work. I know without a higher education I wouldn’t have gotten the principal jobs. I learned a lot from FPU,” he says. “The Christian community I found here was very interesting. I found a large community, a concerned community that cared for other people.”

Read more of Obadiah’s story including his recent trip to visit the university and the unity of the Nigerian church in the midst of terrorism in the Spring 2015 issue of Pacific magazine.

3 responses to “From tennis partner to church and school leader: an international alum’s story”