Day Thirteen – A Trip to Masada and the Dead Sea

Day Thirteen – A Trip to Masada and the Dead Sea

Today, we woke up early to make our way to Masada and the Dead Sea.  Some our team left around 3:30 – or Oh-Dark-Early to make it to the base of the Masada for a hike to the summit by sunrise.  We didn’t quite make it to the top before the sun peaked over the hills in Jordan, but a spectacular sunrise view none-the-less: 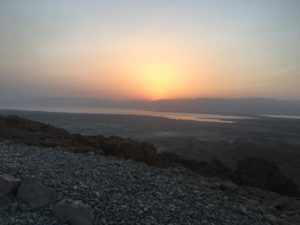 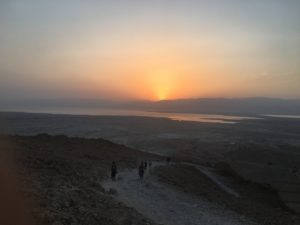 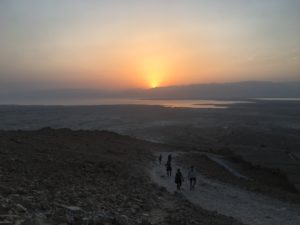 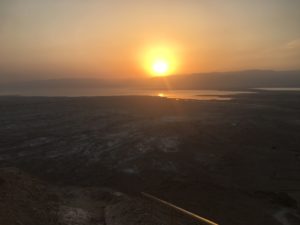 For those who don’t know the tragic/inspiring story of Masada, here’s a brief history from the Jewish Historical Society

According to Flavius, Herod the Great built the fortress of Masada between 37 and 31 BCE. Herod, an Idumean, had been made King of Judea by his Roman overlords and “furnished this fortress as a refuge for himself.” It included a casemate wall around the plateau, storehouses, large cisterns ingeniously filled with rainwater, barracks, palaces and an armory.

Some 75 years after Herod’s death, at the beginning of the Revolt of the Jews against the Romans in 66 CE, a group of Jewish rebels overcame the Roman garrison of Masada. After the fall of Jerusalem and the destruction of the Temple (70 CE) they were joined by zealots and their families who had fled from Jerusalem. There, they held out for three years, raiding and harassing the Romans.

Then, in 73 CE, Roman governor Flavius Silva marched against Masada with the Tenth Legion, auxiliary units and thousands of Jewish prisoners-of-war. The Romans established camps at the base of Masada, laid siege to it and built a circumvallation wall. They then constructed a rampart of thousands of tons of stones and beaten earth against the western approaches of the fortress and, in the spring of 74 CE, moved a battering ram up the ramp and breached the wall of the fortress.

Once it became apparent that the Tenth Legion’s battering rams and catapults would succeed in breaching Masada’s walls, Elazar ben Yair – the Zealots’ leader – decided that all the Jewish defenders should commit suicide; the alternative facing the fortress’s defenders were hardly more attractive than death.

Flavius dramatically recounts the story told him by two surviving women. The defenders – almost one thousand men, women and children – led by ben Yair, burnt down the fortress and killed each other. The Zealots cast lots to choose 10 men to kill the remainder. They then chose among themselves the one man who would kill the survivors. That last Jew then killed himself.

“Since we long ago resolved never to be servants to the Romans, nor to any other than to God Himself, Who alone is the true and just Lord of mankind, the time is now come that obliges us to make that resolution true in practice …We were the very first that revolted, and we are the last to fight against them; and I cannot but esteem it as a favor that God has granted us, that it is still in our power to die bravely, and in a state of freedom.”