[NOTE: On Tuesday, May 16th, a team of three faculty and several FPU students will travel to Israel/Palestine. This is not a typical “Holy Land Tour,” where the purpose is to visit religious/historical sites. This trip is designed to become better acquainted with individuals and groups involved in the various PEACE MOVEMENTS. I’ll write at the end of each day a reflection of that day’s events] 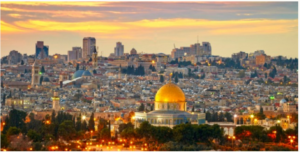 One of the first lessons we learn in conflict resolution (after our first fight with a sibling, a tussle on the playground) is that there are “two sides to every story,” and that you cannot resolve a conflict until you hear the other person’s side. Obvious, now, correct? Quite a revelation when we first heard it.

In preparation for our trip, our group purposed to understand “both sides of the story” of Israel/Palestine (The first thing we learned was to refer to the geographical area we call “The Holy Land” as “Israel Palestine”). We, collectively, read a book – the Lemon Tree by Sandy Tolan – read articles and watched videos. In addition, I read several other books: My Promised Land by Ari Shavit, Israel/Palestine by Alan Dowty, biographies on some of the key actors (Rabin, Begin, Peres), dozens of YouTube videos, and articles on other key individuals and events.

So, what seems to be the case is that, here, the two sides of the basic story have disintegrated into ever-so-many pieces, a land with as many fragments as their are individuals. In all this, there are brave souls in various peace movements trying to sew together a whole out of the various pieces to bring the various collective and individual stories into a single, redemptive story.

It is these stories I am looking forward to hearing.