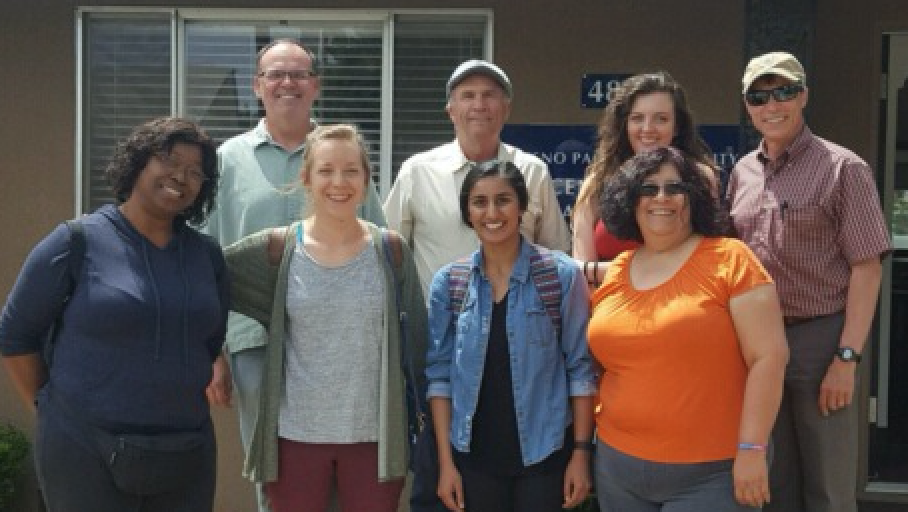 Is it any surprise that our first day on our trip involved lines?: Lines to the LAX, lines at the airport, plane ride, lines at the train station going to downtown Zurich for a quick dinner by the lake, lines back at the airport, line to the cab ride to Tel Aviv. Not too much to report except an incident with a water bottle that resulted in its confiscation (not a good idea to reach around the security to retrieve said item), a dropped passport (quickly retrieved), lots of laughs, a rather frank discussion about where In-N-Out rants in the pantheon of burgers, and more laughs!

We arrived in Tel Aviv early – zero-dark-early!! – 3:30 a.m. or something like that. Made our way to the Abraham Youth Hostel, checked in, and those who were tired headed to their rooms for some sleep in a horizontal position – trying to catch zzzz-s upright in an a slightly (well, more than slightly) cramped Swiss International Boeing 777-ER 300 doesn’t lend itself to much REM sleep! Me? I don’t sleep much to begin with . . . . .

So, here’s a bit more on our first day –

We’ve been traveling for about 24 hours when we entered the cab for a ride to the hostel. Our cab driver, greeted us with a few quite-polite english phrases, enquired of our destination, and off we went!! Our co-tour leader, Dr. Bret Kincaid, unaware our driver’s limited command of our language, saw an opening – an English speaking Israeli!! – and dove right in. Bret’s initial question were well-constructed, timely (mentioned President’s Trump upcoming visit to Jerusalem), and quite respectful. Our cab driver knew a little English – very little English – enough, it turns out, to drive his fare to their destination. Unfortunately, all we learned from our cab driver was: Trump good, Ivanka good; Obama bad. A few more questions did not lead to any further insight, a simple: Trump supports Israel, Trump strong on Israel – good!!

While waiting to check in at the hostel, I ventured outside and struck up a conversation with four twenty-somethings who had decided to stay up most (all?) the night. I introduced myself and asked them their names and where they were from. All were of Jewish descent, one had moved to Israel, two others were interning, and a fourth was on a taglit, a state sponsored ten-day heritage trips to Israel for young adults of Jewish heritage. They asked the purpose of my (our) trip and I answered that we were here to engage in discovery/conversation with groups on both sides of the Jew/Arab divide who were working towards peace. No sooner than the words came out of my mouth than the one of my new acquaintances voiced a full-throated and unapologetic statement of support for Israel. This was his side, his take, on the “Story”!!! The arguments for support were familiar:

All this within a minute or two. He asked me for my position: Was I “pro-Israel”? I politely declined to answer, saying that the purpose of our visit was to listen and learn. After a few exhortations to take a hard look at the pro-Israel position, our conversation turned to the particulars of their world, the nature of their internships, and the taglit. They all wished us well and bid me goodnight!

These two encounters, quite different, no doubt represent others we will have along the way: those with whom conversation will be a challenge because of a language barrier and others who will have no difficulty articulating a strong, and unsolicited forceful opinion. The opinions in both instance represented decidedly pro-Israel position and might end up being typical of those we encounter outside of our balanced, scheduled meetings.

Encounters of the first kind reinforce a perspective many of us understood before we came here – for many Israeli’s, their perspective of the United States is grounded in their perceptions of the “pro-Israel-ness” of the President. I’m sure we will here this again and again, especially as the President is scheduled to visit Israel on the 22nd.

Encounters of the second type also reinforce a perspective of Israelis who are un-conflicted in their support of their country, the story that is most familiar to most Americans. They understand the basic argument for the pro-Israel side and do appear not appear to give much (any?) credence to another perspective. As I was listening to my new acquaintance, I was wondering: to what extent would it be possible to engage such a one in any kind of conversation about the issue? Do they know the “other side” of the argument? Do they know the claims (or better, give any credence to the claims) of others who would assert the Israel’s position is not so clear nor are they hands quite so clean? Do we, as visitors – as guests – have liberty to enquire of their position? Would the kind smile that accompanied our parting be offered if I did?

What what voice, is appropriate to our status in this country on this trip? What posture would invite conversation? Reflection? Is it even possible to converse with some/all we meet?

Much more to write about – more tomorrow.