A Day of History 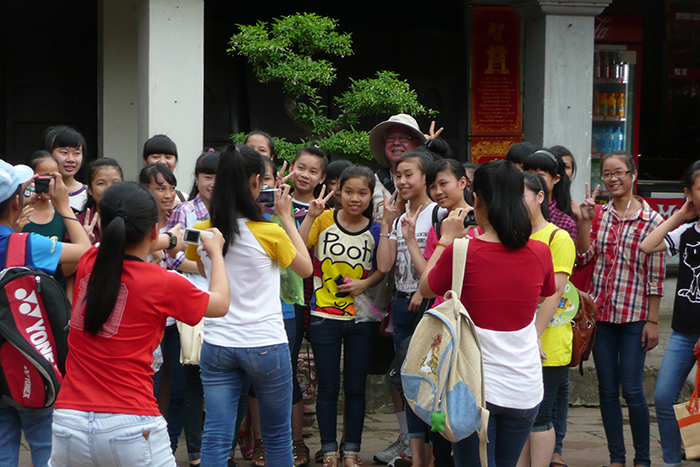 A Day of History

We started off the day by visiting the Vietnamese Temple of Literature. After Hanoi became the capital of Vietnam the temple was built around 1070 to commemorate Confucian teachings. Eventually, the temple would become a place of learning for children of government officials and royalty and the site where tests would be administered for those who wished to become government officials.

After the Temple of Literature we drove to the Ho Chi Minh Mausoleum where Uncle Ho himself is entombed. Rather than bury him, the communist government at the time felt it would be better to embalm him and display his remains for the Vietnamese people to see. Unfortunately we were not allowed to take pictures inside the Mausoleum, but once outside we saw where Ho Chi Minh lived and worked both before and during the war. We also met up with Charles and his students again so we were able to tour around the complex with them as well.

After leaving the Mausoleum we then traveled to the Hanoi Army Museum where the history of the Vietnamese army was displayed, starting from their war for independence from the Chinese in the 11th century. The museum also featured explanations of strategies and tactics the Vietnamese had used to defeat both French and American forces. Many of their displays consisted of items the Vietnamese had either taken from prisoners or captured during the fighting.

By this time it was about 11:30 AM (man we move quick don’t we?) and we made a quick stop for lunch before we traveled to our last stop, the “Hanoi Hilton”. Built by the French during their colonial dominance over Vietnam, the “Hilton” was intended to be a prison for simple criminals. During the war with the French after World War II, the “Hilton” housed many Vietnamese political prisoners and during the Vietnam War, it was where the Vietnamese held American pilots who had been shot down during missions. The nickname “Hanoi Hilton” was given by the American prisoners and now serves as a museum.

After the “Hilton” we returned to the hotel where we spent one of our last afternoons in Hanoi. Tomorrow we will be making the drive the Ha Long Bay and when we return to Hanoi on Thursday we’ll be boarding a train for Hue. Everyone is doing well and I want to thank you all for your prayers and support.