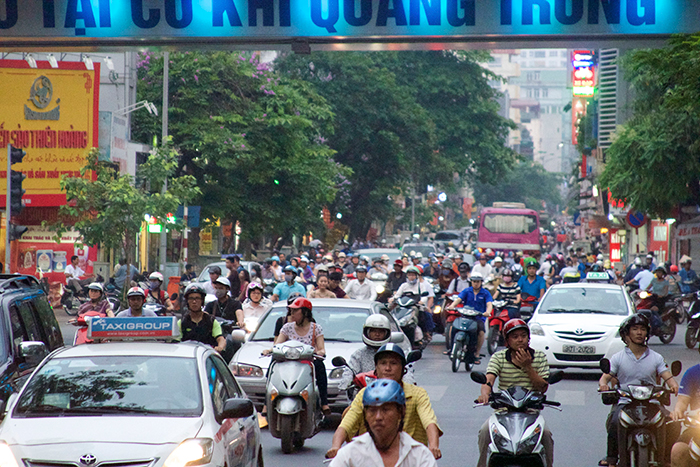 We started the day traveling to the countryside for a bike ride around the area and a short hike near some old architecture.  Getting much more used to the traffic situation and how the organized chaos that it appears to be.  I was really looking forward to getting out and trekking the land on foot, and bike, to venture out into the rural areas.  The heat and humidity made our trip seem much farther than it turned out to be, and we were all a little disappointed to find out we only traveled about 3.5-4 miles. Going up the mountain side provided us with some incredible views and pictures of the landscape. A few of the local women volunteered themselves as help to a few people on our way up, but decided that at one point we had all gone far enough. I assume this was because they weren’t up to the challenge of the climb after a certain level.  Lunch was buffet style.  Everything is shared during meals in Vietnam and it gave me a better understanding as to why the Asian-inspired restaurants in the U.S. do the same with their portion sizes.

After another bus ride we were able to visit an old temple that was part of one of the three main dynasties in Vietnam.  Chosen for its location near and protection from the mountains and rivers.  Emphasis on the ying and yang was present in the architecture.

Our third stop of the day was at a church that had been in existence since the 19th century.  It was really interesting to see how Catholicism and Buddhism were intertwined in the architecture and rituals in order to appease both movements. The outside of the buildings appeared to be traditionally Asian, and on the inside it was exactly how many of us would envision a cathedral. Our tour guide allowed us to travel up to the highest point in one of the buildings and ring the bell. Excellent views of the city and the various churches reinforced how important the religious influence had been during the history and growth of Vietnam.