The Grandeur and Tragedy of the Reformation

The Grandeur and Tragedy of the Reformation

We’ve been back now a couple of weeks from our tour of Reformation Germany, Switzerland, and Geneva. I have been thinking about what we saw, and the events and personalities from 400 and 500 years ago. The experience of being at a place, seeing where Luther, for example, lived and taught (Wittenberg), where he hid for a year and translated the New Testament (The Wartburg Castle), and where he did his university studies (Erfurt) have a powerful impact. It is one of the things that compels us to travel, and one of its most enjoyable results—we see, think and feel differently because of it.

So the travel has stirred me up, especially the historian in me. I have taught the Reformation since the early 80s—30+ years. I’ve read hundreds of pieces—articles, documents, books—on it. I’ve written a few small things. But I saw things that helped me understand with a new emphasis, and perhaps a few things for the first time.

I was struck by the distances between cities and regions, each of which developed in its own way according to the multiple influences of personalities, the theological teaching of different reformers with their own emphases and sometimes unique understandings, the decisions and actions of those in power, and the local and imperial conditions. The differences in developments now make greater sense to me imagining the travel by foot or horse from city to city and region to region. Geneva or Strasbourg is a long way from Wittenberg. Their different histories and well as the way one influenced the other are more tangible now than before. 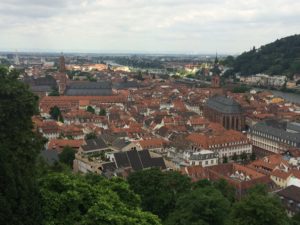 I was reminded of the power of theological ideas to shape how we live and act in this world, and our understanding of how what we do in this world reflects the world of eternity. In our own age we underestimate, I think, the power of theological commitments and religious faith. The new ideas that came from Luther’s fertile study and imagination—sola fides, sola gratia, sola scriptura, alien righteousness, simultaneously justified and sinner, the priesthood of all believers—and that were adapted in varieties by his followers and enemies began a new tradition in the church that has now flowered in those many varieties for several centuries now. Historians debate how the Reformation in significant ways created the modern world. The how is debatable. That it did seems beyond much doubt. It was a movement and century of great importance for us today. 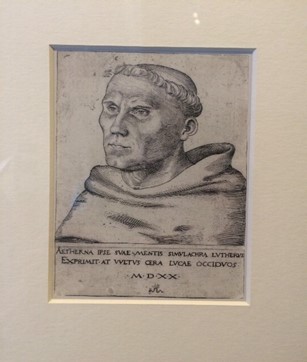 At the same time, it was apparent once again to me, how the church is often (perhaps always) reformed through the rough and tumble political world, whether in the political world of the church, the city, or the empire. That political struggle too has consequences for good and bad. Sometimes politicians, city magistrates for instance, moderate the extremes of the theologians. We saw this in Amsterdam and Switzerland. Sometimes wise theologians guide cities. Politics and political leadership is an important vocation in the city, state, world, and church. We need wise leaders in all of these realms. We also saw how individual leaders could take action to shape the future, despite risk, Frederick the Wise of Saxony is one example in his hiding of Luther from the agents of Charles V. A cartoon of the “Seven Headed Luther” by his enemies: 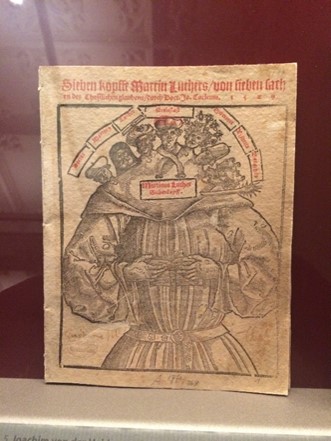 I saw how much was at stake. For some it was the future of Heaven or Hell. For others it was the wealth of church estates, and churches themselves that would could accrue to a prince or city when it appropriated church property. For some it was autonomy from distant political authority; for others it was retaining authority and power over distant peoples. Most of the time, I suspect, these were all mixed up together. 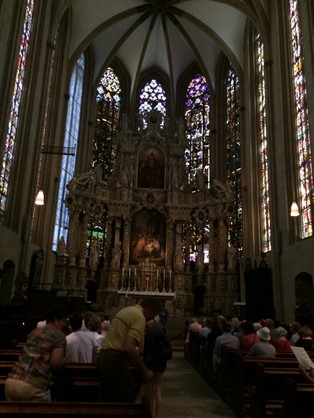 In all of this a few things were missing. Today historians study the influence of women during the reformation. We saw the statue of Katherine von Bora, wife of Martin Luther, and personal equal to him (Herr Katie, equivalent to Sir Katie, she was sometimes called). And Katharina Zell, wife of one of the leading reformers in Strasbourg, Matthew Zell, was mentioned by our guide. She defended marriage by priests/pastors in writing and in her marriage itself when it was still outlawed, and left a prominent body of work that has only been edited and translated in the last generation. We heard story of at least one female Anabaptist martyr, but that was because we had a Mennonite guide who introduced the group to the stories. But other women were not much in evidence, though there is plenty written about them now. We also heard little about the “people’s reformation” and the reformation of the refugees. But perhaps these will be highlighted in future anniversary celebrations. This was the year of Luther! 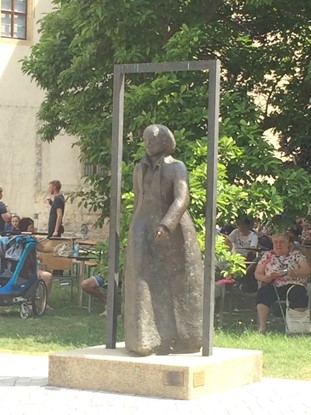 Finally, I was reminded that there was both grandeur and tragedy. Luther’s “Here I stand, I can do no other” was one. War, persecutions and martyrdoms, sometimes because of misunderstandings and fears, sometimes because of simple exertions of power, was the other. Sometimes they were mixed up together. Such is our world.

This is the world we try to introduce to our students. Being forced to consider the complex issues that have created our world by the stunning presence of historical events and sites is one of the reasons we encourage them to travel. We too can benefit from it, even when we have been teaching for a long time.