Reflections on our Tour of the 500th Anniversary of the Reformation

Reflections on our Tour of the 500th Anniversary of the Reformation

One of the best things about travel, to my mind, is the unexpected events, sometimes very small things, that open your eyes and hearts. At the final dinner of the trip we each contributed at least one thing that struck us, maybe something we saw, realized, had never known before, or particularly enjoyed. Since this tour focused on the Reformation, naturally many had insights into Luther, Calvin, and Mennonite experience, but that’s not all. Here are a few of them. 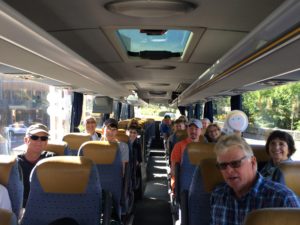 From Darlene, “when you order something to eat you have to be very careful. You might end up with mustard eggs in a bowl of potatoes.” We all tried the local foods. She added that she was struck by how the sun struck the coffin like shapes at the memorial in Berlin to the Jews who were murdered in the Holocaust.

Janet noted that we walked the distance from Hanford to Fresno, but that may have been an understatement. And she added that she wondered whether she “would have been strong enough” to remain faithful under persecution like the Mennonite martyrs. Others affimed that they had the same thoughts.

Anne was reminded of God’s faithfulness, and was grateful for how some of her family in The Netherlands where she was born traveled several hours by bus to spend most of a day with her. What a treat!

Dick was struck by Corrie Ten Boom’s house, having stood in the very small “hiding place” and felt what it might have been like. He also appreciated the passion of the house guide for whom her work at the house was her ministry.

For Terry, the Bonhoeffer house was especially meaningful, along with the “Wittenberg Door,” the experience of Gothic cathedrals and churches, the special Bach concert, and how to (and not to) eat fondue (which apparently our group failed to do correctly). 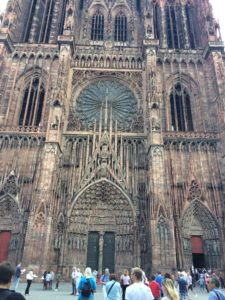 Martin was struck by the burial monuments in churches and Buchenwald concentration camp. Martin spoke for many of us who were silenced by that experience.

Pam sent a text to me just after we had been to Buchenwald with a picture of red wild flowers that said “These reddish orange flowers lined the road leaving the concentration camp. Bonhoeffer and many others lost there freedom within. Genesis 4:10 “Your brother’s blood cries out to me from the ground.” We must never forget them.” 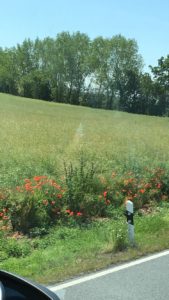 Brian noticed the difference between East Germany which he visited 35+ years ago and now. Then, he says, “it was a gray dingy place” and “now you have to search out the location where the [Berlin] wall had been.” He also mentioned the drive on the Autobahn with Johann at somewhere upwards of 130 miles per hour! (It wasn’t the record for our group–140+–but memorable for us from the US.)

Teri had the insight that our faith is so easy for us. We can do, and say, and believe whatever we want, and it doesn’t cost of anything. We are in danger of living by what Bonhoeffer called “cheap grace,” rather than the costly grace offered by Christ and experienced by many before us.

Jon noted that as a teacher of Reformation history, the geek in him came out at times, and he was reminded of the importance of intellectual honesty in treating all of the Reformation traditions fully. As someone from a conservative churchly tradition, to be in Lutheran and Reformed settings, and with Lutheran, Reformed and Catholic Christians was a new and good experience.

Ben enjoyed making a print of a page from the Bible on a replica of a sixteenth century printing press. It was not a quick as using a copier today, but much quicker than hours it had taken to hand copy a page from a manuscript before the printing press.

Dave realized the magnitude of what had happen in the Reformation and enjoyed worshiping at a Reformed service, in French, in Deventer.

Sandra thought of walking in the footsteps of the reformers and the sacrifice they made.

Beth noted that the daily meals together were always something special. We had local and traditional meals, recounted the day, and planned for the next. She was right! Here is our last evening meal. 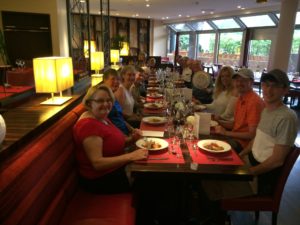 Jennifer was struck by the symbolism in the needlework in Corrie Ten Boom’s house, and read a poem that we heard there. 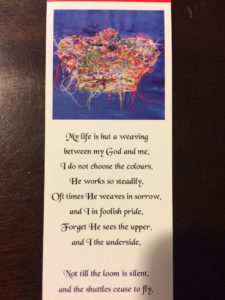 And me? If you’ve read through some of the other posts of our trip, you have heard quite enough from me. I was in “history heaven.” Much of what we experienced will end up in my courses, whether on Reformation topics or the Soviet Experience, of Holocaust.
I also want to say a word of thanks to the group that arranged for all of our travel, Reformation Tours, and especially Rowen Drinkhouse, who had worked with me since last September to get it all put together. A tour like this relies on the expertise of many. Our expert guide, Gunther who hails from Munich, enlightened us not only on the places and events of the reformation, but on the history and contemporary scene in Europe including the twentieth century events—WWI, WWII, and the period of the Cold War, as well as current economic and immigration crises. He took great care of us and even spent evenings with us sitting on city squares enjoying the company and the evening in good European style.  Gunther and Flo with Terry and Jennifer: 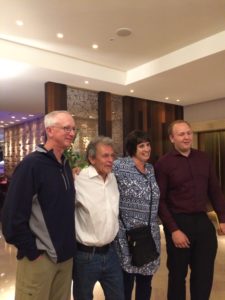 Our guide through The Netherlands and the Emmental in Switzerland, Ayold, who has been mentioned before took special care to explain the difficulties of the Anabaptist movement, and its faithful heroism. And our driver, Flo, took us places in a tour bus that I would not have taken my car. It was an experience. 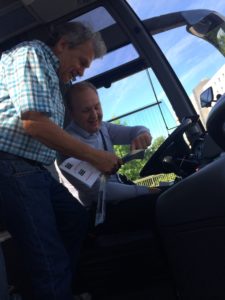