Switzerland among the Reformed and the Anabaptists

Switzerland among the Reformed and the Anabaptists

The last three days of the tour of the Reformation have been back in the country of the Reformed and Mennonites, just as when we started, but this time in Switzerland. As we have moved from Reformation city to Reformation city I have realized how great the distances are when you are traveling by foot or horse, and not by a bus on the autobahn. Each reforming city turned large, tall cathedrals into Protestant churches, developed new church institutions like lay elders and deacons, and the cities took over the role of making law for religious observance in cooperation or antagonism with church leaders. We walked through these cities each with its own inheritance and genius. This is the Zurich Grossemunster. 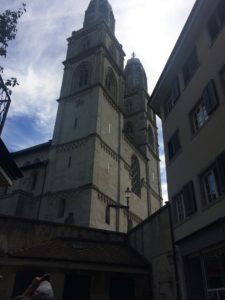 The Swiss Brethren, eventually to become Mennonites, developed self-governing congregations, deeply committed to being holy communities which involved a kind of internal legislation regarding behavior and the relationship of the congregation (perhaps not yet a church) to the world.

First we stopped at Zurich the city of Ulrich Zwingli, the militant pastor and theologian, who opposed Luther on a number of doctrines. Between the two of them they helped keep the newly formed churches divided. But Zwingli’s successor, Heinrich Bullinger, was a wise and moderate pastor, the author of the famous “Second Helvetic Confession,” a confession which discusses the reasons for the shape of the new faith. He also was famous for a number or series of sermons which were influential in England. 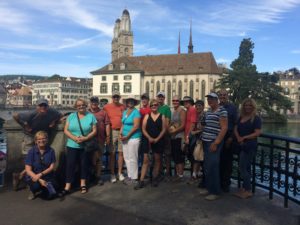 Zurich was also the city of one of the beginnings of the Anabaptist reformation. Our tour guide from The Netherlands, Ayold Fanoy, rejoined us to take us through Zurich, Bern, and the Emmental, a beautiful rural region of Anabaptist congregations and persecutions.  Here is Ayold with Teri and me. 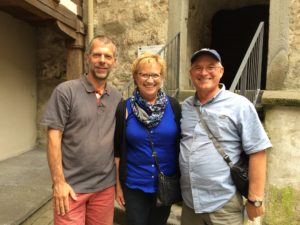 Conrad Grebel, a follower of Zwingli, broke with him over the question of adult baptism. He performed the first rebaptism in Zurich, and was imprisoned as a result. Some of his followers were executed. We saw his home, which happened to be the same building Vladimir Lenin used as a reading room in the early 20th century. The city leaders of Zurich might have seen this as a consistent development of radicalism, most Mennonites, I think, would not. We also stopped for a few moments at the memorial a couple hundred yards from the main church, right in the center of the city, where Felix Manz, one of the Grebel group, was executed by drowning in the Limmat river for his Anabaptist faith. 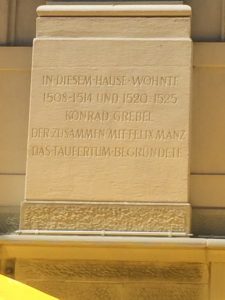 We stopped at the city of with the oldest existing Mennonite Church, and at Trachselwald Castle to see where Anabaptist martyrs were held. We recited a long and famous Mennonite poem and hymn for Hans Haslibacher (from Hasle, and whose descendants still live on the farm where he lived) one of those held in Trachselwald, and executed in Bern on the Main Street just up from the Town Hall where his trial was heard. 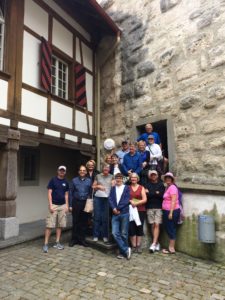 (The round pie plate with the face drawn on it represents Brian, who had to return  home early.  We did not want him to miss out.)

Finally we spent a day and a half in Geneva, enjoying Fondue, seeing Calvin’s famous chair, and the church in which he preached and taught, St. Pierre’s. 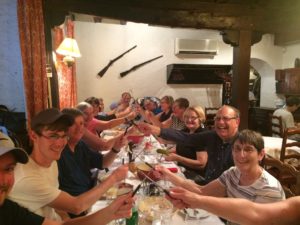 The memorial to the “Reformed” or Calvinist tradition of the Reformation at the base of the hill beneath the old city is a testimony to an international tradition, facing into France which was the center of Calvin’s concerns. He like many others was a refugee from persecution in France. The memorial pays tribute to Reformed developments in The Netherlands, Scotland, Hungary, England, and New England. The Museum of the Reformation in Geneva brings the story of Reformed Protestantism up to the 21st century. It was a fitting end to our journey. 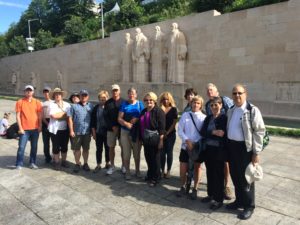 (In honor of the stern faces on the statutes of the reformers, we posed like them.) 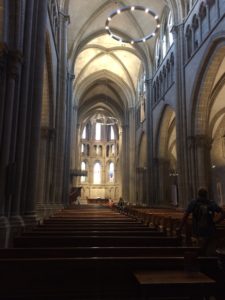 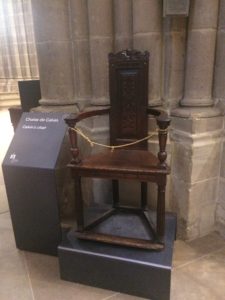 I almost forgot–along the way from Zurich to Bern, we stopped at the Kambly Cookie Factory in Trubschachen, which features free, all-you-can eat cookies. Perhaps a necessary break from our experience of the Mennonite martyrs. 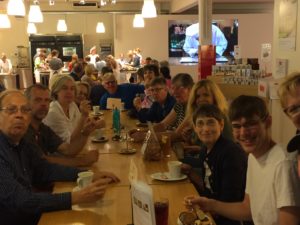