Luther’s Table Talk and Quotes, and Bach too

Luther’s Table Talk and Quotes, and Bach too

Wittenberg, Erfurt, Eisenach, and Worms, these are the Luther towns we have visited. Erfurt was the town of the university he attended. He lived in Eisenach to attend the Latin school, and sang as a choir boy to earn money. At Worms he was examined before the emperor, Charles V, in 1521 and said the words (or maybe didn’t—they are in the first-hand accounts) that have become so associated with him as a the voice of conscience against unjust authority: “Here I stand, I can do no other.” 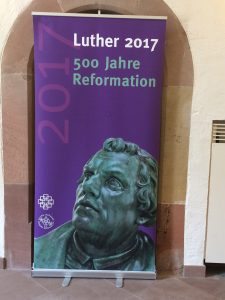 You see signs for the 500th Anniversary all over this part of Germany. But in Halle where we spent an evening, and in Eisenach, we saw signs with Luther’s words, quotes from him. His off-hand comments, were printed in his Table Talk. He was a genius with language, if sometimes harsh and off-color. His was a big personality and it came through what he said. 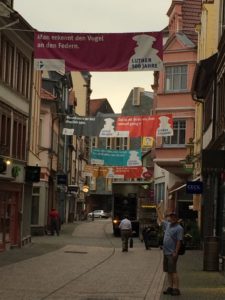 I asked the group for their favorite Luther quotes. Here are a good handful of them, in living color…
(We are quoting from memory. So there may be a bit of paraphrase.)

From, Dave, who is a choir director, “Why should the devil have all the good tunes?”

“No one can live in this world without sin.” Luther reminds us that God asks not for good works, but to respond to his grace with faith. Sin is in us, a part of us. Trying to please God by asking for his favor because of our works is not faith, but leads us away from faith. He also said “Sin boldly, but repent mor boldly still.” And he said, “God does not need your good works, but your neighbor does.”

The Protestant reformation brought a new emphasis to marriage and the family, “Let the wife make the husband glad to come home, and let him make her sorry to see him leave.”

“The fewer the words the better the prayer.” And “to be a Christian without prayer is not more possible than to be alive without breathing.”

There are a number of quotes about beer. “Whoever drinks beer, he is quick to sleep. Whoever sleeps long, does not sin. Whoever does not sin, enters Heaven. Thus let us drink beer.” He also said other things about beer. For instance, it caused all kinds of problems in the Germany of his day. Not much different than today.

“I have held many things in my hand, and I have lost them all. But whatever I have placed in God’s hands, I still posses.” And he said something that has become a part of the larger Protestant world, “We need to hear the Gospel every day, because we forget it every day.”

Luther wasn’t the only famous person in Eisenach. It was also the town of Bach. We had an added treat of a private concert at the Bach museum, on eighteenth century instruments. Organ music and hymns are present everywhere in Luther towns. 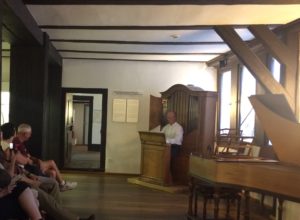 You can see the statue of Bach behind us if you look closely.  And with the umbrella is Johann Mathies, director of Mennonite Brethren Missions in Europe and Asia, who joined us for a day and add to our trip with stories of the church today and in the past. 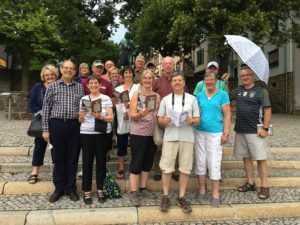