The last two days for our tour have been overwhelming. As I write this, we are taking a brief break before dinner in our hotel in Halle, a Renaissance city which we will see this evening, the city of the composer Handel.

Yesterday we spent in Berlin, a city still rebuilding after the fall of the Soviet Union and East Germany, and trying to find a way out of its Nazi and WWII history. We visited Berlin Wall sites, checkpoint Charlie, the Brandenburg Gate, as well as the Holocaust memorial to the six million Jews murdered during the wars. You can’t get away from the 20th century history—all still very much with us.

Part of that history was the resistance of the church in Germany. We visited the Bonhoefferhaus, the family home of Dietrich Bonhoeffer, and received both instruction in Bonhoeffer’s theology and his participation in the plot to assassinate Hitler. The decisions that people faced, the brutality of the time and of the Nazi regime, the loss of life and the destruction of the ware, and the courage of some like Bonhoeffer, those who plotted against Hitler, and those who sheltered and helped Jews escape were difficult to fathom. 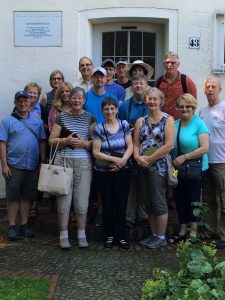 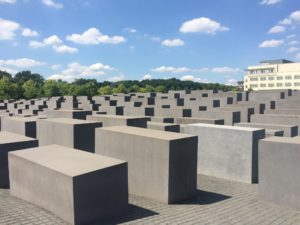 Today we were in Wittenberg, a very different city. We visited the Lutherhaus, the monastery turned home and student residence of Martin Luther and his wife Katie von Bora and their family. The city has been refurbished over the last five or ten years—it is beautiful right now—for the 500th Anniversary. We walked the near mile along the university center, past and into the Melanchthon House (Philip Melanchthon–a very different person than Luther, though his closest collaborator), to the Cranach House (two for them) who illustrated Luther’s writings, to the Castle Church and the famous “Wittenberg Doors.” 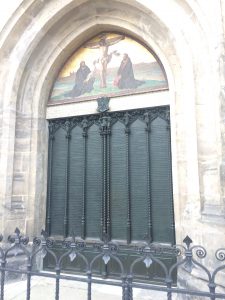 Luther was a larger than life figure, even in his own day, prone to excess in speaking and acting, and to extravagant insights as a theologian and politician. Luther’s presence is evident throughout this part of the former East Germany. Wittenberg is now called Luther-Stadt Wittenberg, and many other places are “Luther towns” as well. We saw 16th century books, drawings, and paintings. We walked where he and others walked, studied, taught, and defied princes and bishops. It will take some time to absorb. 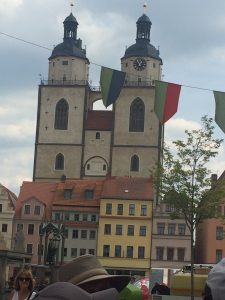