We have finished day three of the FPU “500th Anniversary Reformation Tour.” There are sixteen of us from Fresno, Clovis, Hanford, Reno, Pensacola, and New Hampshire—a great group to travel with—some experienced, some for the first time traveling. We are enjoying learning, sitting in street side cafes, and exploring the cities. Everyone we have met has been gracious and welcoming. The Dutch are wonderful hosts.

We spent two full days in or near Amsterdam and saw the “Oude Kirk,” Anne Frank’s House, took a Canal Tour, as well as the Bedijnof, a hidden Catholic Church, a church and square for medieval lay women dedicated to God and service. The next day we visited Haarlem to see St. Bavo’s Cathedral, where we had a guided tour and heard the organ, as saw also the very large and still active, formerly-hidden Mennonite Church. And we ate in the church’s Javanese restaurant. Here we are with our Dutch Mennonite guide Ayold Fanoy. 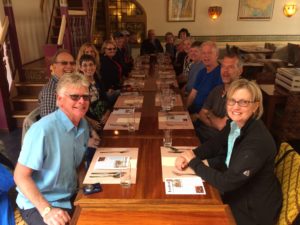 On day three we traveled to Deventer, the home of the medieval reforming movement called the Modern Devotion for a worship service in the Reformed church there—a beautiful small town on the eastern edge of The Netherlands. And it was a beautiful church with its white walls, and clear glass through which the light of the sun poured during the service. From there it was bus ride across Germany to Berlin where we will tour tomorrow before heading into the cities and towns where Martin Luther taught, wrote, and sparked the Reformation. 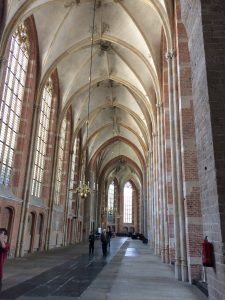