Education happens on the weekends too. Yesterday evening, Friday, we were Christ Temple Church for the first part of a two day event organized and hosted by Dr. Karen Crozier, Assistant Professor of Practical Theology and Special Assistant to the Provost for Peace and Justice Initiatives. The event was officially sponsored by my office, the Provost’s Office, but Karen is the person behind and in front of the event. The first such weekend of study and celebration was last year–we may be on to an annual event.

Right now I am in Wiebe Center with a group of about forty students and ten instructors and presenters discussing one of King’s speeches read to us by FPU student (and track athlete) Norris Lee, “Why American May Go to Hell.” King preached on Jesus’s parable of Dives and Lazarus. Dives, the “millionaire,” ignored the poor at his door. Lazarus, the poor man, ended up in Heaven; Dives landed in Hell. As Jesus said what you do to the least, you do to me. A sobering speech, not often printed, not comfortable to listen to, but powerful in content and in Norris’s delivery. 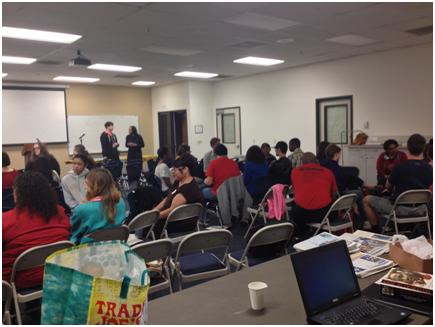 Last night we heard Howard Thurman’s eulogy for King. In the Peace Circle (Karen is very skilled at hosting and managing these) I was in two of our group had grown up as black children in the Jim Crow South of the fifties and early sixties. They could tell stories of the segregation or races and injustices they and their families faced. After the circles and reports, we listened to a panel of local pastors who work directly with the issues of segregation, unequal treatment, and poverty that King championed. In particular they discussed the Church’s role in this work. I was struck by how most of them combined into a working harmony the preaching of the Gospel to save the lost, the nurture and care of families and congregations, and active work in their communities on behalf of the poor, those in need to bring justice to their communities. Pastors have to work out an effective and subtle theology to help them understand the complexity of the work they do. I learned much from the panel. You will recognize a couple of them who are long time supporters of the FPU—in particular Pastors Paul Binyon and Jonathan Villalobos. 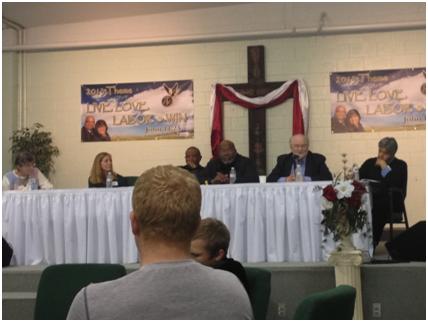 Now we are beginning another panel with Prof. Anna Berardi from George Fox University, Prof. Ryan Schellenberg from FPU’s Biblical Studies department, and Prof. Karla Kirk, instructor and program coordinator of African-American Studies at Fresno City College (and a BA and MA graduate in history of FPU). Later this afternoon the speakers for the afternoon panels will arrive, two from the City Council of Fresno, Blong Xiong, and Oliver Baines, Greg Garner from the Fresno Police Department, and Holly Sims (she says she is not a professor yet) from Indiana University, along with several others. The panel beginning now is about education. The afternoon panels are about Community and Civic groups, and later “The New Jim Crow.”

This final topic comes from a book of that title by Michelle Alexander who argues that the large proportion of African-American men now incarcerated amounts to a “new Jim Crow” society. It is a powerful thesis and there is something to it. Alexander notes that it is not the result of a conspiracy or an official policy, but the result of our basic social inequities, the uneasy relationships between races, and hopelessness among the African-American community. Pastors in the Black churches can tell you about the reality of what Alexander writes. Last year I was on a panel on this topic with Greg Garner and a FCC instructor. This one will take several years of work.

Prof. Berardi has now told personal stories about racial conflict as she grew up, and about how she attempts to teach her students. Prof Schellenberg explained how he tries to teach students to see elements of the text of the Bible that are somehow hidden from them—like the poor Lazarus in King’s sermon. Karla Kirk has reminded us of the need not to think that reflection on justice and injustice in our society is not the something that we take up one week in January each year. It is something we have to live.

But since I am blogging, I suppose I can have the last word. First we at Fresno Pacific owe a debt of appreciation to Dr. Crozier for her work on this event. I hope we can make it an annual event and we grow from the fifty who are here, to one hundred and fifty or two hundred.

Second as I have listened to and read King over the last weeks, and last semester when we read a couple of his brief works in my course on the history of political theory, I have become more and more impressed by King’s contribution in three ways. He is a consummate rhetorician and preacher and so his words grab us and shake us until we have to respond. Perhaps only Abraham Lincoln has the same stature in the American tradition of political speech. He is also able to bring together the best of the Christian and American intellectual traditions into his work. He brings in Jesus, Paul, St. Augustine and St. Thomas; he refers to natural law and the declaration of independence; he knows intimately modern theologians like the Jewish scholar Martin Buber and the Christian theologian Reinhold Niebuhr. He convicts us by judging us against the law of our deepest commitments. And finally King was an extraordinary gifted analyst of political and social situations and needs. He pointed out like no one else the character of southern society particularly and American society generally and the crucial need for civil rights, practical access to voting, and opportunities for jobs for all American. (I haven’t mentioned King’s non-violent approach—I am sure someone else at FPU is much more competent to do so than I am—but we can’t ignore.)

Well, maybe I shouldn’t have the last word, Karla Kirk is right now reminding us that King’s insight, passion and work grew out of his Christian faith. And she is encouraging students to see what we are discussing as a “calling,” a religious calling to follow in the way of Jesus. That seems a fitting close for this note.