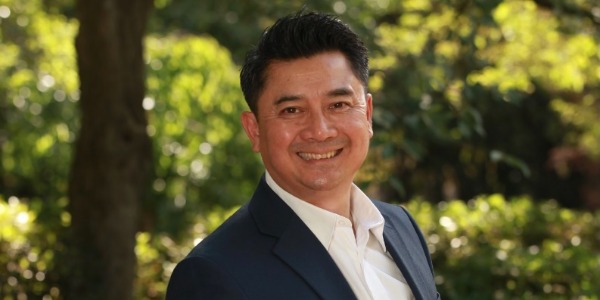 Christian Douangphouxay was 9 when his family arrived in the United States from a refugee camp in Southeast Asia. His father had $10. Four decades later, Christian is an entrepreneur promoting cryptocurrency, a 21st century form of payment for goods and services that could revolutionize the world’s financial systems.

“I truly believe this is where finance is going in the future,” he says. Christian is the co-founder and chief operating officer of FireAnts Crypto, a company that developed a cryptocurrency of the same name. Cryptocurrency—and its accompanying blockchain technology—is a new financial system filled with terms and concepts that stretch the understanding of a public accustomed to cash, checks and credit cards.  Christian is undaunted by that lack of familiarity, and it’s the same optimism that has buoyed his life in America.

In his native Laos, Christian’s family served the monarchy. His father was a captain in the Royal Lao Army, and he fought for the king when communist forces waged a civil war in the 1970s. When the communists won, Christian’s family fled to Thailand, where they lived in a refugee camp for three years.

In 1981, the family arrived in the United States, settling in Orange County, California. They had to quickly shed the privilege they had enjoyed in Laos, Christian says. “We were just refugees, like everybody else who’d been in the camp in Thailand.”

His father worked in a warehouse, and his mother opened a restaurant to support their three daughters and son. “We knew we had to do something to better ourselves,” Christian says. “We didn’t have mentors who could tell us how to live the American dream. We had to drive ourselves, and education was what we really had to focus on.”

Along that path, Christian’s childhood friend introduced him to an early version of an Apple Mac computer.  “I was so excited when I saw a computer for the first time,” he says. “I typed a command, and it interacted with me. I could write code and manipulate things on a keyboard.” That fascination would drive his future.

After high school, Christian attended a community college, and then in 2001, he got a job in information technology with the Tachi-Yokut tribe, which owns and operates the Tachi Palace casino in Lemoore. Promotions followed, and he eventually became the chief technology officer for the tribe. As he took on more management responsibility and supervised employees, he wanted a degree in business. “I needed the knowledge of how to lead people, and I didn’t want to do it with my own wisdom,” Christian says.

FPU’s degree completion program allowed him to continue his full-time job while attending the Visalia campus. Raised a Buddhist, Christian also had an interest in Christian leadership. He began to embrace the faith as his cohort at FPU studied the Bible. “I realized the Bible is beautiful. It’s all there in Jesus’ teachings: there is nobody else who can say he is the way to the father,” he says.

Christian returned to FPU to earn a master’s degree in business administration after his promotion to Tachi chief technology officer. “I knew I’d be in meetings with people who would have an MBA or a law degree, or be a CPA, and I wanted to have an advanced degree so I could speak their terminology and make the best-informed decisions in strategic planning,” he says.

In June, Christian left Tachi after 20 years with the tribe. “I had built a nice legacy and a good team that could continue my work,” he says. He then founded the Crypto Learning Center in Lemoore, which provides onsite and online classes on investing in cryptocurrencies. He also turned his full attention to FireAnts, one of 19,000 cryptocurrencies now traded publicly.

The value of all cryptocurrencies is more than $2 trillion. A cryptocurrency increases in value as more people buy it, and people buy for many reasons. One reason is a belief in the blockchain technology that publicly records all transactions involving cryptocurrencies; FireAnts has its own blockchain. The advantage of blockchains: they are decentralized and offer greater security and transparency than traditional banking systems, Christian says.

FireAnts is to benefit humanity, Christian says. So, the company has committed to holding on to 60% of its cryptocurrency—rather than sell it to investors—and using it to finance clean water projects, broadband expansions and other philanthropic projects when FireAnts’ value rises and generates sufficient revenue.

Three former FPU faculty members in the School of Business serve on FireAnts’ advisory board of directors and will oversee projects both in the United States and overseas. They are Nicole Cochran, Ed.D.; Andrea C. McAleenan, Ph.D.; and Peng Wen, Ph.D. Cochran, one of Christian’s instructors in the MBA program, says he has “a heart to serve, and his compassion for others is infectious.”

Those faculty members and others at FPU helped shape Christian’s vision of his role in life. He sums it up with this quote from Hans Urs von Balthasar, a Swiss theologian and Catholic priest: “What you are is God’s gift to you, what you become is your gift to God.”