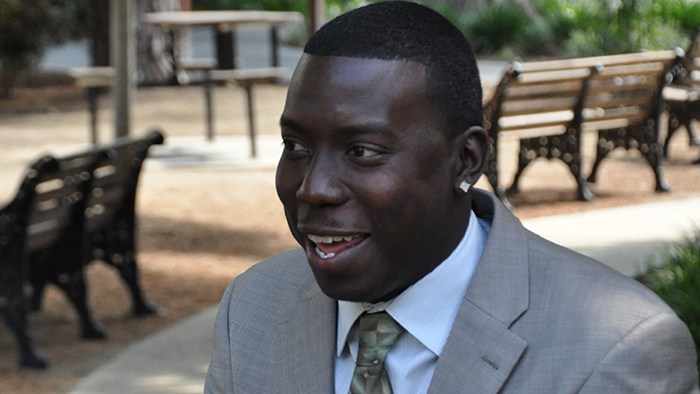 If you attended FPU’s spring 2014 Commencement at Chukchansi Park in downtown Fresno, you probably remember one of the graduates giving FPU President Pete Menjares an enthusiastic, prolonged hug as he crossed the stage. The crowd couldn’t help but applaud his accomplishment even without knowing his story. And his story truly does make you want to stand up and cheer.

Trevor grew up in South Central Los Angeles hoping that football would be his ticket out of the projects. When his SAT scores prevented him from accepting a full-ride scholarship, he continued to play football at a junior college and eventually transferred and graduated from the University Nevada-Reno. 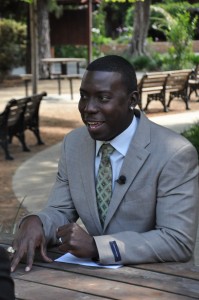 Once he finished his bachelor’s degree, however, Trevor found himself back in the old neighborhood and being pulled into the life he was trying to escape. But God hadn’t forgotten him and while working as a dishwasher at a restaurant, he met a friend whom God used to change his life. Lauren was the daughter of Eric and Darlene Hanson who have been generous FPU supporters for many years. Over time, the Hansons became friends with Trevor and eventually learned of his goal to get his master’s degree and become a school counselor. They referred him to FPU, and after making a weekly drive from L.A. to Fresno for three years—never once missing a class—Trevor graduated in May and accepted a position as counselor for the Strengthening Young Men By Academic Achievement (SYMBAA) Program at Fresno City College. Here he will help at-risk African-American male students achieve success. With his past record, we have no doubt he will succeed at this new endeavor.

Look for a more complete story about Trevor in this fall’s Pacific magazine.