The month of March is celebrated as Women’s History month. This designation provides the opportunity to reflect on the historical contributions of women in the present and the past. The theme for this year is “Providing Healing, Promoting Hope.” We are inspired by those heroines of the faith who with uncommon service placed others needs before themselves.

The university launched an Uncommon Heroes Campaign this year. In the spring edition of Pacific magazine, we feature some women whose work promote healing and hope. One of the famous sayings of Margaret Thatcher is: “If you want something said, ask a man. If you want something done, ask a woman.” Some may find the humor in this saying, but in so many places there is wisdom in the adage. When we reflect on the major influencers of healing and those who promote hope among us, no one can deny the role of women in our personal and corporate lives.

Dr. Mary McLeod Bethune became one of America’s most inspirational women. The daughter of former slaves, she became a civil rights advocate, an educator and founder of Bethune-Cookman University. She expanded her work as a businesswoman who purchased and managed real estate for the benefit of the Black community; sold insurance and co-owned a mortuary service – all for the benefit of others. She once said that “the true worth of a race must be measured by the character of its womanhood.”

Dr. Bethune was one of those uncommon heroes few outside of the Black community celebrate. She advised four U.S. presidents on childcare, housing and civil rights issues and founded the National Council of Negro Women, which became a major civil rights organization in this country. She would say “next to God we are indebted to women first for life itself, and then for making it worth living.” Dr. McLeod was inducted into the National Women’s Hall of Fame in 1973, 18 years after her death.

In her quest to provide hope and healing, she depended on the grace and power of God to do her work. After completing Bible school, she wanted to be a missionary to Africa. She was told that the mission organizations would not send Colored people to Africa. Trusting that God had a purpose for her life, she moved south and started a small girl’s school with five students and $1.50. That school became a university. The hope of a missionary died, but the seed of faith in God grew to something far beyond what she could imagine. Her common quote was “Faith is the first factor in a life devoted to service. Without it nothing is possible, with it nothing is impossible.”

If you research Dr. Bethune’s life story, you will find inspiration and hope for what God can do with the little we have. In these days of global turmoil, we are encouraged by reminding ourselves what God has done in the past through the most unlikely people. Our prayer for the FPU community is found in Romans 15:13 – “May the God of hope fill you with all joy and peace in believing, so that by the power of the Holy Spirit you may abound in hope.” We pray that in your hope you will also provide healing to others. 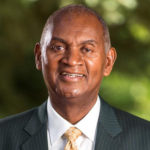