Do Not Despise Small Beginnings 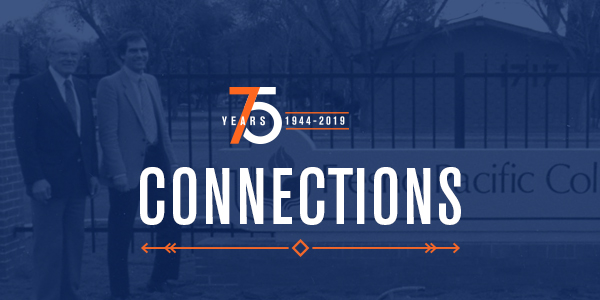 Do Not Despise Small Beginnings

In early July 1984 my weary Honda Civic got me to Fresno just in time to experience a record number of daily temperatures in a row above 100. I set about trying to understand my role as the new vice president of business, fundraising and generally anything else that was not an academic or student life program. I joined the process of trying to get everything on campus as ready as possible to welcome about 400 undergraduate students for the start of the 40th academic year of Fresno Pacific, though it was only its 20th year as a four-year degree institution.

I came from a Christian college in Illinois that was five times bigger and incomparably wealthier and more prestigious than Fresno Pacific. I was 43 years old and I had never been vice president of anything. I was recruited by President Edmund Janzen and Board Chair Arthur Jost, both of whom seemed inexplicably confident about the future of the college, despite its small size and accumulated operating deficit. They were similarly confident that I could do the job.

They had sent Robert Enns, Ph.D., the academic dean at the time, to meet with me on their behalf in Chicago. He told me candidly that he wished they did not need me to come, but he was afraid that they did. It was a small comment. It would take me several years to appreciate what a huge insight it was. I represented a major shift for Fresno Pacific. I was the first top administrator from outside the sponsoring church, a highly visible example of the “Broadening the Base” that President Janzen had initiated and named.

It would take additional years for me to appreciate how they looked at 400 students in accredited degree programs with dorms, classrooms, labs, a library, a dining hall (that doubled as the chapel) and athletic facilities, most dramatically the Special Events Center that had just been completed. They were comparing it to a school with 40 students and no real campus home. It was a matter of perspective. Progress from the past to the present gave them confidence in God’s faithfulness for the future, even if the present seemed comparatively precarious and led to a very different future than had been originally envisioned.

When the Persian King Cyrus allowed the Israelites to return to their homeland in 538 B.C. after the exile in Babylon, Zerubbabel led them in building a new altar and a new temple. Ezra reports that, when the builders completed the foundation of the Lord’s temple, there was a loud and joyful celebration. “But many of the older priests, Levites, and other leaders who had seen the first temple wept aloud when they saw the new temple’s foundation…The joyful shouting and weeping mingled together in a loud noise that could be heard far in the distance (Ezra 3:12-13).”

Some preferred longing for the past; the account says they were some of the older folks. And others chose to look at the present as the new way to a new and different future. The new temple looked small compared with the grandeur of Solomon’s Temple. It was a small beginning as God moved his people beyond the limitations of their original understanding of his covenant with them. They were on their way to becoming a blessing to all peoples of the earth.

The majority of enterprises and institutional transformations start small. The prophet Zechariah served as one of the chief supporters and encouragers of Zerubbabel. Zechariah’s summary of the situation provides a compelling principle for Fresno Pacific University. “Do not despise these small beginnings, for the Lord rejoices to see the work begin… (Zechariah 4:10)”

Through a countless series of small beginnings, during its first 75 years Fresno Pacific has moved from 40 students to 400 and now to over 4,000 in degree programs, including Fresno Pacific Biblical Seminary, and almost 10,000 in Continuing Education courses. We have moved from a small, narrowly defined institute of and for one particular church group to become a large and complex Christ-centered university serving the Kingdom of God as part of a widely diverse community of Christian faith guided by God’s word.

But unlike most institutions who followed this sort of trajectory in their development, Fresno Pacific continues to be guided by the same confession of faith and the same statement of educational philosophy in the Fresno Pacific Idea that it has followed since its earliest days as an accredited institution. The scope of the vision expands, but faithfulness to its principles of biblical faith and to a particular kind of educational community continue to define the culture and character of Fresno Pacific University. This core stability gives the university a unique capacity to continue its pattern of excellence and innovation.

My coming to Fresno Pacific in 1984 was part of one of those small beginnings. We can all rejoice that as we celebrate the 75th anniversary of this great institution, we continue to be a place that does not despise small beginnings, a place where the Lord rejoices to see the work of his kingdom constantly begin anew.