Life was the Lesson for Wilfred Martens

Life was the Lesson for Wilfred Martens 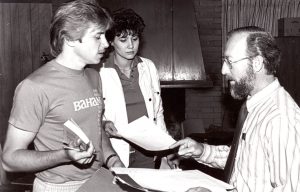 Wilfred Martens taught a lot to those lucky enough to know him, whether as a member of the English faculty at Fresno Pacific, a tour guide at Hearst Castle, an instructor at the University of San Francisco or in classrooms at Elderhostel, China and Lithuania.

But like any master teacher, his greatest lesson was his life.

A lot of people knew Wilfred longer, better and more deeply than I. The size of the crowd spilling out of the sanctuary of his beloved College Community Church Mennonite Brethren at his memorial service last Saturday testifies to that. I can see Wilfred grinning at my impertinence at writing even this brief and incomplete tribute, but I think he liked a little impertinence. In any case, if you have other, better stories about Wilfred, please tell them to me.

Wilfred was one of the first people I met coming to Fresno Pacific in the final weeks of its life as a college. I was the quintessential new guy—new to Fresno Pacific, new to Fresno, new to California, new to the Mennonite Brethren. I needed help, and Wilfred knew that.

Before I realized what was going on, Wilfred had me nestled snugly, and gratefully, under his wing. Gary Nachtigall had given me one of his famous campus tours, showing me where things were and sharing a few of the stories behind the locations. Wilfred made sure I understood the context of what and who were around me.

As much history as Wilfred knew, he always looked to the future, and the future he saw for Fresno Pacific University was bright. I asked him sometimes if he ever missed this or that time, and his answer was always an unqualified “no.” I can’t quote his exact words, but his response was along the lines of “The best years for Fresno Pacific are yet to come.”

What Wilfred never told me about were his achievements. I didn’t know he was a community leader in providing better living for adults with disabilities or that he had published a novel. I knew about his late-career doctorate because I wrote about it for the seventh issue of Pacific magazine that I edited. He must have been proud of that journey of several years, but he described it with humor: “I wanted to celebrate my 60th birthday in a unique way. Some people climb Mount Whitney or parachute from a plane—I decided to do a Ph.D.”

I got the feeling what he really enjoyed was the vision of Narnia that students, faculty and staff, led by Alumni Director Bruce Porter, built that Christmas in the lobby of the Fresno Metropolitan Museum. “It’s just perfect,” he told me.

After Wilfred retired, we kept running into each other: Annually at Fresno Greek Fest, where he enjoyed gyros and souvlaki with the same gusto as the zwiebach and verenika at the MCC Sale. Weekly for a couple of years at New Horizons Music Band and Orchestra of Fresno, where he and Erma played clarinet.

Wherever I saw him over the years, his eyes still twinkled and he still looked ahead. Whatever his body thought, his mind was ready for a conversation and taking the time to join in was a wise investment.

I always learned something.

4 responses to “Life was the Lesson for Wilfred Martens”