The night before his reluctant conversion to Christianity, C.S. Lewis walked for several hours with J.R.R. Tolkien, author of The Lord of the Rings. Tolkien, a deeply committed Christian, was doing his best to convince Lewis of the credibility of both Christ and the church. All along the way, Lewis spouted out one objection after another. At some point in the conversation, Tolkien responded: “Your inability to understand stems from a failure of imagination on your part.”

Our electricity often went off when we lived in Kenya. The stove in our kitchen went cold with the food half-cooked, and the lights and overhead projector at the university died—always without warning. In such moments, I found myself standing there, either tapping the pan or staring at the students. Had Tolkien witnessed my frustration, he might have replied, “Your inability to cope with the situation stems from a failure of imagination on your part!”

What is imagination? In our culture, an imagination is frequently equated with fantasy. We picture cosmic adventures like Star Wars or mythical tales like Harry Potter. If a child draws a bizarre sketch or concocts a ridiculous story, we often conclude that he or she has a vivid imagination. Fantasy and imagination, however, are not the same thing. While fantasy typically distances itself from real-life situations, imagination inhabits and interprets everyday experiences.

Think once again of those power outages in Kenya. In the kitchen of our house, fantasy would invite me to envision the Galloping Gourmet flying in on the back of a stork and converting the half-cooked chicken into a salad from Ruth’s Chris Steak House. Imagination, by way of contrast, would take stock of the situation, recognize the dilemma and suggest creative alternatives. Imagination might whisper, “Put the chicken back in the refrigerator until tomorrow, and instead hollow out the two pineapples and fill them with yogurt, slices of mango and a few nuts.” In the classroom, fantasy would conjure up glimpses of an elf magically appearing with a glow-in-the-dark writing board. Imagination would encourage me to move the class outside and begin an innovative but relevant discussion. Fantasy is an escape route from the problem, while imagination provides a fresh and potentially helpful way to transform the situation. Fantasy can be fun and exciting. Imagination can be liberating. “It’s my conviction,” Thomas Moore once wrote, “that slight shifts in imagination have more impact on living than major efforts at change….”

In Isaiah 11:1-9, the prophet speaks, not about fantasy, but imagination. In referring to lions and lambs lying down together or children playing beside a snake’s nest, Isaiah invites us, not to envision a magical land of castles and dragons, but to see the possibilities that exist in the world all around us. “This is how God intended and wants our world to be,” he boldly suggests, hoping to stir within his peoples’ minds and hearts a “slight shift in imagination.” Such a shift, the prophet realizes, is the starting point for transformative engagement.

I sense that many of us at Fresno Pacific University and Fresno Pacific Biblical Seminary are ready to see lions and lambs lie down together. We are concerned about our school, city and Valley—and beyond—and we want the Lord to use us to bring about genuine and lasting change. Where do we begin, we wonder? What are we to do? I have two simple suggestions. First, we can open our hearts and minds to new possibilities, ask God to remove our doubts and fears and pray for a “slight shift in imagination” to inspire us. Then, we can follow Annie Dillard’s advice, grab our crash helmets, and join Dr. Joe on the ride!

[1] In her wonderful book Teaching a Stone to Talk, Annie wrote the following words in response to the insipid expressions of Christian worship and service that are all too common: “On the whole, I do not find Christians, outside of the catacombs, sufficiently sensible of conditions. Does anyone have the foggiest idea what sort of power we so blithely invoke? Or, as I suspect, does no one believe a word of it? The churches are children playing on the floor with their chemistry sets, mixing up a batch of TNT to kill a Sunday morning. It is madness to wear ladies’ straw hats and velvet hats to church; we should all be wearing crash helmets. Ushers should issue life preservers and signal flares; they should lash us to our pews. For the sleeping god may wake someday and take offense, or the waking god may draw us out to where we can never return.” 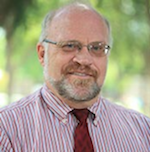 One response to “Fantasy or Imagination”